Why does my Twitter character limits hit the max so quickly? For as long as the bird has been on the social media scene, you’ve been asking yourself that question and wishing you had more characters to tell everyone about your day.

Twitter could be on the eve of granting your number one Tweet-wish. 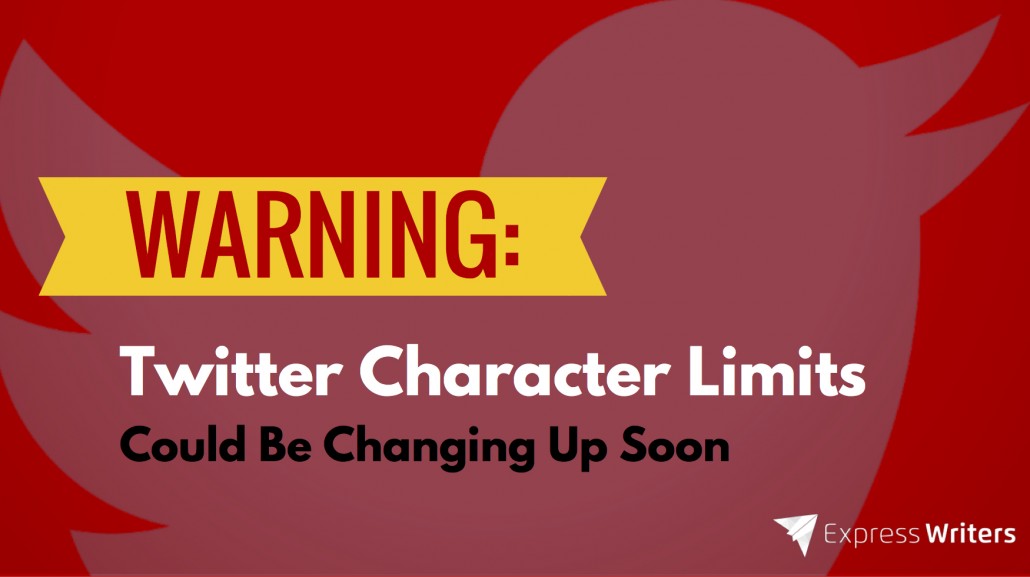 Since its inception in 2006, Twitter has been a place for social media recluses to come and spill their feelings in 140-character spurts. The Twitter character limit has remained the same for nearly 10 years and is one social media aspect that has not been moved despite many changes from those other social media sites. In March,10 years after the first tweet was sent, things are slated to change. While many may see the character increase as a good thing, devoted Twitter users are up in arms about the change.

The longstanding limit of 140 characters is rumored to be increasing to 10,000 characters right around the time the social media site celebrates the big one-zero.

Twitter CEO and Tweet enthusiast, Jack Dorsey, has not officially announced the increase, but has been dropping subtle hints.

With Jack spouting things about the character limit imposing restrictions and release little-known information about why we even had to deal with a limit in the first place, it’s left more than a few people sitting with the hope that tweets can become something more than the often cryptic, tiny messages fired to other users.

Despite major changes that have been seen in other social media platforms, Twitter has remained steady in the way that if functions at its core. The site has managed to keep limits and dubious amounts of pictures at a minimum. The limits have helped prevent it from becoming the corny site that your grandma (and, admit it, you) use to connect with emotional friends who can’t keep their, seemingly 10 page, sagas off their statuses. The new character limit increase would mean an increase in the way that people can share their feelings and a decrease in the number of texts-as-screenshots pictures would appear on your Twitter feed. Twitter sees the large number of texts being screenshot and shared on Twitter not as a problem, but as a call for help from Twitter users. The dozens tutorials on quickly screenshot-ing your texts for Twitter that can be found online should have been enough for Jack Dorsey and his tweet team to see that there needs to be more options for people to post everything they want to say. The short but sweet bit was a fun act for Twitter to play and a great niche for them to fall into, but it is getting old and Twitter users are demanding more ways to communicate without even knowing they are doing it.

Many of the 974 million Twitter users are upset over the big changes that could be coming to Twitter. The majority of these users are upset and are sending out Tweets just like this one:

Users are upset over the change because, to them, Twitter is a place where creativity is forcibly inspired due to the character limit. Sure, you can post multiple tweets recounting the story of why you and your husband are no longer together, but the character limit really makes you think about what you really need to include in the story.

When looking at the increase in character limit, it is a good idea to see all of the benefits that come with more characters on Twitter. You can tell your friends full stories that have enticing headlines, Twitter can become a place to highlight a business’s creation of content and you can easily search for conversations that people have had…without having to worry about looking for their screenshots. The new character limit increase will make Twitter an all-around better social media option.

The proposed increase in character limit will likely not change the way that you send little messages to your friends, but it will give you more of an opportunity to include everything that you want to tell them.

Businesses, individuals and marketing experts will all be able to pull big benefits from the plans that are going to change Twitter forever.

For years, businesses have had to settle for bite-sized URLS and quick posts about sales that they might be having. The proposed character increase will allow these businesses to tell you all about upcoming sales, events and promotions. They can cram more information into a 10,000-word Tweet than they could with only 140 characters.

Remember that screenshot your best friend posted two weeks ago? Remember how she also posted 1,000 tweets since then? If you want to search for the screenshot, you have to remember what the caption of it was. You can’t search by what it actually said because it was a picture. With the new increase, your best friend will be able to post the words directly to Twitter. You can get right on, search for what she said and recall it to remind her how awful she felt when her boy-toy of the month cheated on her.

Some of the biggest benefits will come to marketing experts. For years, businesses have been asking the experts to Tweet long ads and information for them. This has never been a reality, but the increase would allow social media content creators to have all the space that they need to work with to get information out about the best businesses in the world of Twitter.

Check out our social media writing and management services!

#ContentWritingChat First Episode: What is a Copywriter? With Julia McCoy R...