false
You are here: Home / Social Media / Meet The Newest Social Network, Ello: What Is It & Should You Join...

There’s a new social network out there that makes everyone sound like the little worm from Labyrinth, “Ello! Wouldn’t you like to come in and meet the missus?” However, this is more than a Jim Henson character’s accent, it is the new wave of social media.

Just what is Ello? Well, you won’t see any little worms asking you to come to tea (sorry to disappoint you). This blog is going to explore what this new social network is, why everyone is going cuckoo for Ello, and whether or not you should join it.

Ello is a new social media site that has yet to leave the beta (or testing) stage. With the popularity of social media, new social sites are always popping up with things such as Path, Snapchat, and others that aren’t quite as popular. However, Ello has a significant draw to it. First of all, it is a new social site that helps connect you with people who have similar interests, as well as those you know in real life.

Second, it is ad free and promises to not have all of the annoying posts people see on social sites like Facebook or Twitter. If you get consistently annoyed with how many odd Facebook memes your uncle or third cousin shares, you can either not add them on Ello, or simply file them away under the “noise” portion of the network. As for being ad free, they are keeping it this way by making sure it stays a private company and giving people the ability to purchase add-ons for their profiles.

It is obvious from the design down to the titles of their pages that they are reaching out to younger generations. All you have to do is take a gander at the title of their help section “WTF.” Not every generation is going to get a kick out of that, but Millennials, many Gen-Xers, and new generations for sure will.

Why Is Everyone So Crazy About Ello?

Ello is receiving almost 40,000 requests every hour for an invite and there are currently over 1 million people waiting for an invite to the beta stage. There are only a few people who are lucky enough to know someone already on there with a few invites available. Just why are people so crazy about this site? Well, because it is pushed as a completely ad-free social site. In their manifesto, they make sure people understand that Ello is not like an ordinary social site that collects your data and sells it to further their company. They want to create a genuinely great place for online social interaction that doesn’t revolve around which ad they can choose specifically for you.

Should You And When Can You Join Ello?

It might be quite beneficial if you can join it soon, but the main problem right now is whether or not you will get an invite. Sure, you can fill out a request for one, but you are going to be waitlisted for quite a while. No one really knows when you will be able to get onto the social site without an invite. However, one thing to keep in mind is that this is, as we mentioned, the beta stage of the network. This means that those who are on the site right now are bound to see several major and small tweaks that aim to make this page the best ever. Another thing about the beta stage is that current users can help Ello develop the best site possible for its official release, prepping it to be ready in time for you to join. They even inform those who have recently joined that there will be several changes every day and week until it is ready through emails sent out to users.

The Pros Of Ello

Obviously, the biggest pro to this site is the fact that it is ad-free and it doesn’t sneakily gather up your information to improve the site and advertisements like Facebook and Twitter do. They do mention that they have the option for you to allow them to gather data, but you can choose to not have that happen. This caught a few people off guard, but Ello points out Facebook and Twitter never give you the option to opt out. If you are simply looking for a new, personal social space, this might be the thing for you. There are already several users who have said they are switching to Ello simply to get away from the family posts, political posts, and advertisements they see every day on Facebook or Twitter.

However, what about pros for businesses? You might be worried that you can’t share your ads on Ello because it is “ad-free” but according to Marketing Land, you are more than able to do this. The great thing about sharing your ads on Ello is that you aren’t being charged for them like you would be on Facebook and Twitter. When you get a chance, you can set up a page for your business and start using it to your advantage.

The Cons Of Ello

While you can share any of your ads that you would like to for free, a major drawback for small businesses would be no promoted ads, yet. You would have to encourage people through your other social accounts to follow you on Ello to see your ads and updates. The problem with this is that you could very likely be filed under the noise category. Basically, you will have people who follow you, but they won’t see your updates unless they head over to their noise file and take a look.

Another con to Ello is that many people are worried that once it grows and allows for the million and more people to join, Ello will eventually start becoming overrun with ads and selling information. There have been other social sites out there that promise to be better than Facebook whether it be ad-free, easier to navigate or whichever the latest complaint is. In the end, people will have the same complaints about those sites as they did with Facebook.

What Does This Mean For Marketing?

It is hard to tell just what this means for marketing since it is still in beta, but hopefully people will be able to figure out whether or not this social site will have any marketing benefits. Some people are hoping that this site stays content-driven, which will be great for companies who want to push their content, not just pay for pay per click ads. Yes, those PPC ads can bring in some revenue, but the more content-driven your campaign goes, the more success you are likely to see. In fact, it is a wise idea to start spending more on content, especially with the need for more content-driven posts instead of advertisements.

A few steps you can consider as you prepare to use this site are:

Just like with any new social site, only time will tell whether or not Ello will succeed. As you can see from some of the articles shared throughout this piece, there are people who think this site is doomed already. Many are comparing it to the less than successful release of G+ and G+ Circles. The main problem with this if it fails is Ello doesn’t have Google behind it to make it important in ranking your site and content.

If you are one of the lucky ducks who is able to get onto Ello before it is out of its beta stage, then you should make sure to follow a few of these public profiles. Many of these will help you as you learn how to use this site, as well as any new additions made to it. 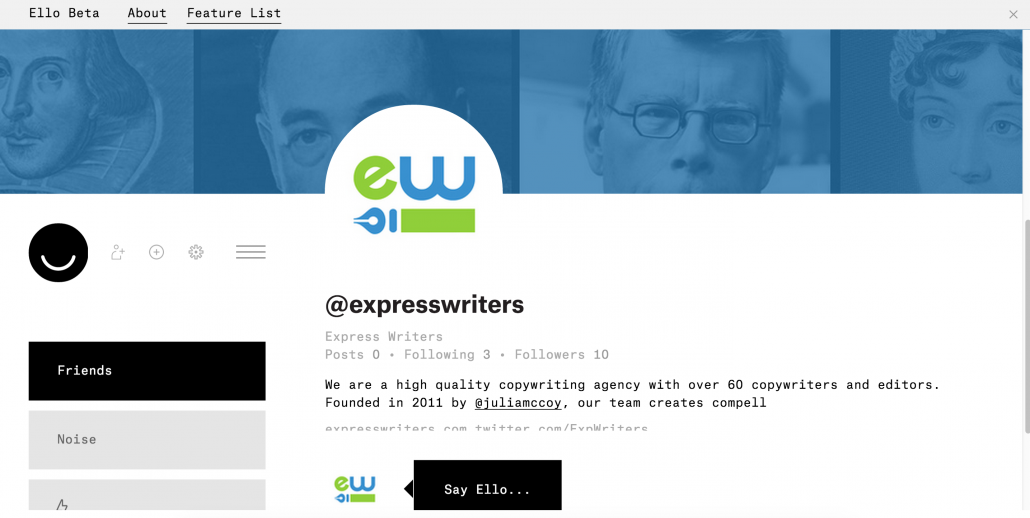 Are you going to try to get into Ello beta or wait for it to go public? In addition, do you think you will ever join the Ello community? It will be an interesting adventure to watch as this social site grows. Will it be the next to flounder or will it really be an alternative and the killer of Facebook? Only time will tell.