false
You are here: Home / SEO / Why Google’s Newest Panda Might Not Hit Till 2016

Anyone who is familiar with Google’s algorithm updates knows that they are extensive, frequent and often vague in terms of detail.

Although Google’s most recent update, Google Panda 4.2, was released in July of 2015, many SEOs believe that the rolling-out process of the newest major Panda update isn’t actually done rolling out. 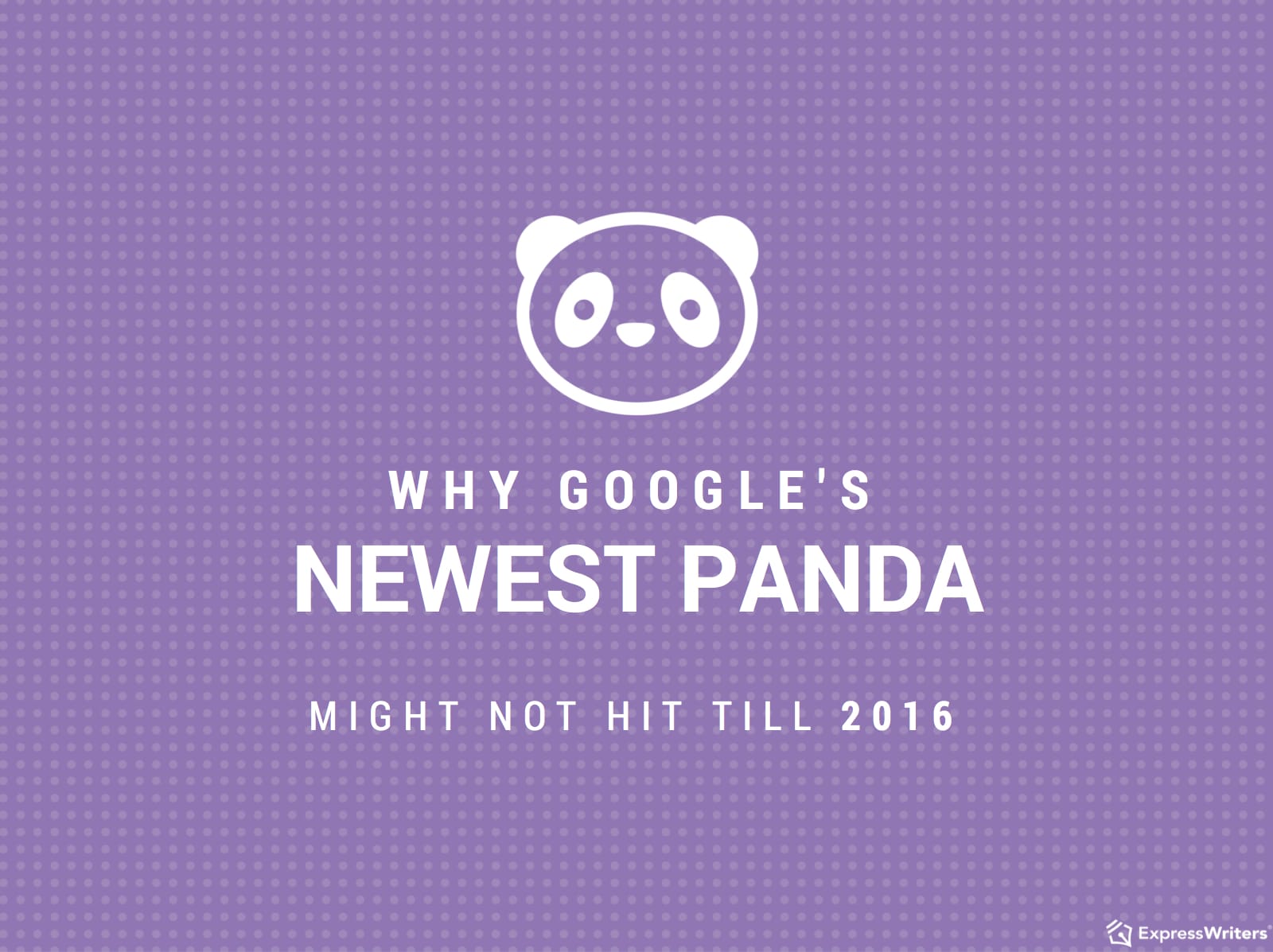 Looking At the Current Panda 4.2 Update

When Panda 4.2 was introduced in July of this year, its express purpose was to reward quality content and down rate scraped, duplicate or low-quality content. From the get-go, it was clear that this Panda was a little slower moving than the others, but, even as the weeks began to wear on, very few SEOs expected so much time to pass before admins started to notice changes in their sites. Sites that were hit by Panda 4.1 have had to wait 10 months to redeem themselves and, due to the fact that 4.2 is also painfully slow to roll out, it’s unclear whether the changes made by those previously affected sites have actually been effective. Needless to say, this is a source of frustration in the SEO community.

In addition to being amazingly slow to implement, Panda 4.2 is also impressively extensive. When Google released Panda 4.2, it stated that 2-3% of Google’s search queries would be affected but, when you take into account that Google gets billions of daily searches, 2-3% equates to roughly 36 million affected queries. This makes it the broadest update in quite some time due to the fact that, between 2011 and May of 2014, no individual Google update affected more than 2.4% of search queries. Even though SEOs know that Panda 4.2 will affect millions of searches, the entire process has been so slow to roll out that nobody knows how, exactly, those millions of searches will be eventually be affected.

In the light of all of that ambiguity, it’s tough to make any solid statements about Panda 4.2. The one thing that SEOs do know for sure about this Panda update is that, as usual, quality content is the only safe place to be. This means avoiding things like keyword stuffing, ugly sites or exploitative SEO practices. Because Google has dedicated itself to rewarding high-class content and down-ranking sub-par content, sites that publish well-written, original content are less likely to be negatively affected by the mysterious new Panda updates.

While nobody quite knows just yet what Panda 4.2 will reward or punish, most SEOs believe that creating great content and avoiding bad SEO practices is a safe place to sit and wait for the changes to begin showing themselves.

The main question people have about Panda 4.2 is “is it here?” The answer is “Yes – but only kind of.” Panda 4.2 was instated around July 18th, 2015, at which point Google said the changes would take place over “several months.” Obviously, that’s vague at best and absolutely unclear at worst. What we do know is that Google waited 10 months after Panda 4.1 to release its next update and that a large portion of that was due to technical glitches and complicated system issues.

Additionally, while it’s not uncommon for a Google algorithm change to take a number of months to go into full effect, it’s clear that this one is going extra-slowly. This is actually the slowest Panda roll out to date and, as such, many SEOs are concerned that the new changes are so complex that they can’t easily be instated in a matter of days.

Google, however, says this isn’t true. During numerous interviews, the company has stated that the new Panda roll out isn’t going slowly purposely to confuse SEOs or to make life more difficult. Instead, the company says that this slow Panda roll-out is a preview of coming attractions: a time when Panda will be one, large, continuously rolling and changing system that is incorporated into the company’s most fundamental algorithms. While the company acknowledges that they’re not there, yet, it seems as if this ultra-slow Panda roll out is the first step in that direction.

Additionally, the company has assured SEOs that, while Google Panda 4.2 is a site-wide action, it is unlikely to affect each of a site’s pages in the same way, which is why many SEO’s have yet to see any real or definitive changes. Sites that are bound to be dinged by Panda 4.2 may not actually know it until the entire roll out is complete – some time in the distant future. At that point, affected sites will need to wait until Google releases its next update in order to revamp their pages.

The Verdict: The Newest Panda In the Works May Not Hit Us Before 2016

Considering the fact that there were 10 long months between Panda 4.1 and Panda 4.2, it seems unlikely that the next update will happen any time before 2016.

For now, the best Google has to offer is that site owners should keep an eye on their analytics. By isolating organic traffic driven by Google and closely analyzing any large dips or boosts, site owners can begin to get an idea about whether the big Panda is here and, furthermore, whether it has begun to affect their sites or not.

Although many SEOs feel a bit helpless during this time of Google ambiguity, there are a few things you can do to mitigate the uncertainty and ascertain whether Panda 4.2 has affected your site:

1. Frequent Site Audits. The first is that you can keep checking your site for any positive or negative impacts that seem different from the norm. This is likely to be a strong indicator of the fact that Panda 4.2 was there. Unfortunately, however, once the changes are instated, it’s too late to do anything about your site and, if you have content that is going to be punished by Google, it will be punished no matter what you do.

2. Stay Informed. With that in mind, it’s wise to continue keeping an eye on your site and visiting popular Google hangouts for any definitive news about Panda 4.2.

In the meantime, be extra aware of web spam and crappy content and avoid both like the plague. While the new Panda may be more mysterious than all of the others, SEOs need to take comfort in the fact that there will eventually be some answers.

While Google Panda 4.2 is officially here, it’s tough to know exactly how it’s going to affect sites just yet. While it’s not all that different than previous updates, Panda 4.2 promises to be increasingly tough on content mills, web spam and poorly written pieces.

In light of this, the solution is the same as it ever was: cling to high-quality, original content and avoid bad SEO.

That way, when the big, bad Panda does decide to show its face, your site stands a better chance of being prepared.

A Guide To Compounding Blog Posts: Increase Your Blog Traffic Month after M...