false
You are here: Home / SEO / Google Cracks Down on Spam with Panda 4.0 Algorithm Update 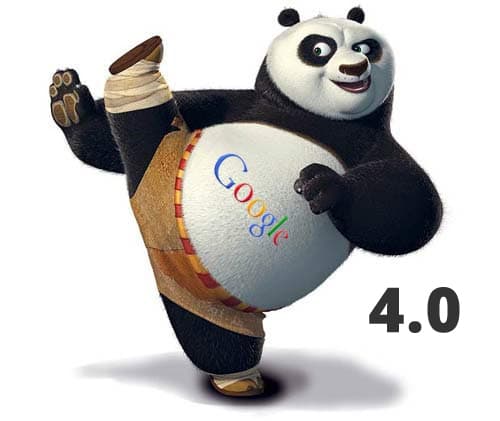 Apparently, Google doesn’t plan to stop pulling rabbits out of its white hat anytime soon. Over the past weekend, Google has started rolling out a brand-new algorithm update designed to win the battle with spam, in all its forms.

On May 20th, Matt Cutts announced on Twitter that Google is ready to launch its Panda 4.0 update:

Most likely, to reinforce its efforts to ensure a superior web experience for all users while fighting the creation and promotion of low-quality, meaningless content. As a matter of fact, according to The Moz Blog, Google actually gave the green light to 2 updates: Payday Loan 2.0. (which addresses “very spammy queries”) and Panda 4.0.

Meet the Winners and the Losers of Panda 4.0

Some of the biggest players on digital markets have already been hit hard by this new update that impacted their website traffic: Search Engine Journal reveals that ask.com, ebay.com and biography.com are only 3 of the giant well-known websites that witnessed a drastic traffic reduction of over 33%. Yikes! Panda 4.0 also announced a few lucky winners that managed to display substantial traffic gains, including emedicinehealth.com, medterms.com and zimbio.com (revealing an astonishing 500% traffic increase!)

Can you guess what separates the winning side from the sore losers? Content appears to be the game-changer. At this point, these numbers are difficult to interpret. However, most of the players that were brought to their knees by Panda 4.0 promoted duplicate or syndicated content, so this may be one of the causes of their recent failure. However, taking into account that the new update is not entirely rolled out, we can still expect to witness many more ranking changes.

Should We Feel Intimidated by the New Panda 4.0 Algorithm Update?

Each and every single time Google is getting ready to throw unscrupulous spammers to the lions (or to the cranky Pandas, in this case) without giving us a heads-up, we can’t help but wonder: how it this change going to impact websites and everyday people who depend on a regular content flow to grow and run their online businesses?

At this point, according to Search Engine Land, Google is now affirming that Panda 4.0 affects 7.5% of all English-language queries, while the Payday Loan update influences approximately 0.2% of the overall number of English searches.

There is a great deal of speculation regarding the overall impact of this new algorithm update and the supplementary measures of precaution that webmasters would be forced to take to avoid search engine penalties and stay friends with Google. Could this brand new wind of change reflect Google’s intention to throw a rope to small business owners who are struggling to make a name for themselves and improve their bottom line by simply boosting their premium content creation efforts?

Could We Be Dealing with a Less Aggressive Panda This Time?

During the Search Marketing Expo, Matt Cutts announced that Google’s search team is currently working on a new Panda update that may be cataloged by many people as “softer”. Furthermore, according to Search Engine Land, Cutts has explained that this update is specifically designed to lend a helping hand to small-scale businesses, by enabling their websites to perform better in search results. Could the 4.0 update represent the less aggressive approach to helping small company owners that Cutts was talking about not too long ago? It’s still too early to jump to conclusions.

Small business owners may expect an increased level of visibility in local search results, which would represent a great advantage. After all, unlike large corporations that set bigger goals and have the means required to reach a broad audience, most small companies choose to promote their business and market their goods locally, because most of their clients are recruited from the local sphere. In this particular content, one question comes to mind: would Google actually be willing to soften its Panda update? Sure, why not? Chances are that Google has actually embraced this approach, especially since it already counts on a solid precedent: the softer version of the Panda algorithm rolled out in July 2013 (one of our infographics explores the timeline history of SEO and Google’s most feared algorithm update).

All in all, even though we still don’t have all the details required to get the bigger picture when it comes to evaluating the fresh Panda 4.0 update, it seems that small businesses could actually benefit from this softer version allowing them to improve their online visibility.

Many webmasters probably feel that they are wandering in the dark and are most likely asking themselves the following question: how do we have to act from now on to cope with this change and adapt to new challenges?

Better Content Will Always Represent the Key to Success

There is only one good answer to this question: by investing more time, money and energy in original, reader-oriented, properly optimized content pieces that have nothing to do with spammy, black-hat SEO practices and any other attempts to deceive search engines. As long as you play by the book and realize that premium content created to provide value to your readers is the solid foundation of any successful strategy, you will manage to protect your business against the powerful wind of change without worrying that Google’s never-ending series of changes could nuke your company and burry it 6 feet under the ground.

Should SEO Experts Stop Trying to Make the Pig Fly?

These 2 new algorithm updates have created quite a stir in the SEO community. After all, many businesses that got hit by Panda never managed to recover, so the fact that changes implemented by Google make most webmasters tremble in terror is perfectly understandable.

But does this mean that this crazy zoo counting an angry Panda, Penguin and Payday Loan should make SEO experts quit their jobs and run away with the circus? Absolutely not! According to Bruce Clay, the president and owner of Bruce Clay Inc., (cited by Search Engine Journal), great search engine optimization strategies relying on orthodox, Google-friendly tactics, still manage to prove their effectiveness even with all these updated rolled out by Google. Google is constantly cracking down on superior quality, so as long as you maintain a user-friendly website with a logical architecture displaying premium, optimized, regularly updated content, you have nothing to worry about.

Keep in mind that neglecting Google’s rules and guidelines would be like swimming against the current: tiresome and pointless. All in all, above-the-average content is your one and only way of salvation.

Instead of spending a significant amount of time rubbing your crystal ball and trying to find out what the next update may bring, you could always redirect your resources towards content creation to enhance the value of your web writing and make it become truly irresistible in the eyes of both human readers and search engines.

The Write Era: Why & How Today Is the Day of Online Content