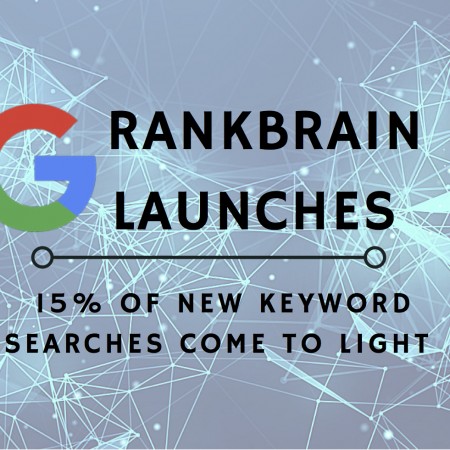 This AI (Artificial Intelligence) system is designed to help Google organize and categorize all of its search results and news of it is currently breaking the Internet. For those of you who are unfamiliar, here’s the skinny on the new RankBrain technology.

What is Google RankBrain?

Google RankBrain is an AI system that Google designed to assist in processing search results. The system operates by teaching itself how to complete a task and is currently being used to search the billions of pages in Google’s ranking indexes in order to find the ones that are most relevant and most valuable for a given search query.

Because the release is so new, it’s still a little unclear whether or not RankBrain is a part of the entire Google Algorithm known as Hummingbird, but sources like Search Engine Land believe that it is.

There are dozens of components that make up Hummingbird and many SEOs believe that RankBrain is simply the latest. This is fueled by the fact that Bloomberg Business reported that Google RankBrain won’t handle all searches as the algorithm would, and is only responsible for a portion of them.

According to Google, RankBrain has been live since early in the year and has been fully rolled-out for several months now. RankBrain will affect a huge number of queries and, as queries continue to roll in, the AI system will continue to become more advanced and learn to make predictions about certain search patterns.

In fact, RankBrain is already beginning to get better at predicting a page’s rank than its human counterparts: according to recent information, engineers involved in developing the software were asked to guess where various pages would be ranked according to Google’s ranking signals.

While the engineers guessed correctly 70% of the time, RankBrain got it right 80% of the time. (Better than human?)

People who want to learn more about exactly how the AI properties of RankBrain function can consult this blog post (although the technology is not called RankBrain in the post).

How Does Google RankBrain Work?

The details on this are still foggy but right now the best guess is that RankBrain is used to interpret searches that are submitted to Google and to match them with pages that may not feature the exact keyword phrase that was searched for, but which are relevant nonetheless. This is an expansion on previous Google technologies that allowed the search engine to present pages that didn’t feature the exact search terms entered – so that people searching for “running shoes” would also see pages that targeted the keyword “sneakers” and so on and so forth.

Right now, Google receives over 3 billion searches on a daily basis and, in 2007, the search engine giant reported that 20-25% of those search terms were totally unfamiliar. In 2013, that number scaled down to 15%, which was still significant for such a huge machine (it amounts to about 450 million search terms each day that Google has never seen). The 15% estimation holds true today and, presumably, RankBrain is a way to refine and categorize those queries in order to deliver better results for Google users.

How RankBrain Is Involved in Google’s Ranking Signals

When it comes time to rank a webpage, Google uses a wide variety of so-called “signals” to determine how to rank the page in the index. Things like bolded words, mobile-friendly pages, and local listings are all signals that Google uses to rank a page. These signals are processed by various parts of the algorithm in order to determine which pages show up in SERPs and which do not.

According to Google, there are more than 200 big-time ranking signals used when ranking each page. Many people believe that these 200 signals then give way for up to 10,000 sub-signals. This is important to know because, seemingly out of the blue, Google is now saying that RankBrain is the third-most important ranking signal in existence right now. Although we know that this is a huge development, since we don’t know exactly how RankBrain will look in the coming months, it’s hard to tailor content to this development as it stands now.

The Future of Google RankBrain

Right now, many SEO experts believe that the presence of RankBrain may indicate a future trend toward voice searches.

For example, a person who wants to issue a voice search may ask “Where can I get a bagel in NYC?” while a text search may look more like “bagels NYC.” The fact that RankBrain is capable of learning, adapting to, and predicting a variety of new search queries indicates that the Google engineers may be predicting an AI system that can eventually answer basic questions and even complete easy puzzles.

This, ultimately, is an extension of a program called The Knowledge Graph, which Google released in 2012. The Knowledge Graph was Google’s way to reach toward becoming more intelligent about the connections between words. With the inception of this program, Google moved toward doing what it called searching for “things not strings.” This meant that Google went beyond searching only for information that matched a string of letters and began, instead, searching for pages that provided answers to the questions a person was probably asking through their search queries. For example, The Knowledge Graph allows searchers to enter a term like “when was Nixon born?” and get an answer complete with maps without ever specifying that you mean President Nixon.

As RankBrain becomes more established, it seems evident that the service will combine with other Google technologies, such as rich answers (more on these in a moment) to create an intuitive search experience that allows the search engine to see and predict patterns and decipher complex, long-tail queries that may not target specific keywords. RankBrain is designed to translate those queries and present the correct information to the searcher in a format that doesn’t require him or her to navigate away from the search page. This, in turn, will help decrease the number of search queries that Google can’t understand and will create a more satisfying search experience for searchers and Google engineers alike.

The Future of Search & the Increase of Rich Answers

The trend toward more information with every search has already been exhibited through Google’s rich answers. Instead of displaying a simple response when a query is issued, Google progressively upped its rates of rich answers, which is an attempt by the search engine to answer queries in a way that doesn’t require users to click through a website. Rich answers include things like snippets, charts, tables, maps, forms, sliders, and images. Consider the following example of a rich answer:

Recently, a study conducted by Stone Temple Consulting revealed that of 850,000 search queries entered, a whopping 19.45% of them result in rich answers.

This, along with the introduction of RankBrain may well point to the fact that Google as a whole is leaning toward a more intuitive, intelligent search system that helps users find exactly what they want in a single search while also picking up the slack for 450 million unfamiliar search terms.

Although the scope of RankBrain is not yet clear, it seems evident that the new program is a sliver of the big picture and that RankBrain is primed to make a big impact on search results forever.

Google isn’t exactly an impulsive company and, while the search engine giant tests many things, it only launches huge changes when it’s reasonably certain that they will make a positive impact that aligns with Google’s overall mission and projections. Additionally, the fact that RankBrain is now the third-most important ranking signal in all of Google is a huge deal and serves to further reinforce the idea that Google engineers are gearing up for big changes in the way people search the web.

So How Do We Prep for Search Changes Across all Content?

For marketers, these impending search changes have the potential to offer huge branding benefits if content is designed correctly.

For now, though, we have yet to see exactly what RankBrain will do and how it will affect queries. As always, we will keep you posted as we learn more but, for now, the same thing as always holds true: create original, high-quality content, post it often, do good keyword research, and be active on a variety of social media outlets. That is the key to search query success.