false
You are here: Home / Updates / Why Upworthy Just Ditched Aggregated Content: The Necessity of Original...

Upworthy is a site best known for video. Once a king of viral content, the site rose to fame by unearthing uplifting videos from the dredges of the web, pairing them with attention-grabbing and highly shareable headlines and sending them out into the world of Facebook, where they garnered tens of thousands of shares almost immediately.

The video content format was so popular, in fact, that by November of 2013, the site had gained 90 million unique readers in this fashion.

It wasn’t all gravy, though, and by August 2014, Facebook had altered its policy on clickbait headlines and Upworthy’s readership began to take an alarming plunge, due to the aggregated content.

The site has since recovered its former level of popularity but, in order to do so, it had to make a somewhat uncharacteristic move.

Rather than aggregating content and throwing it out to the Internet at will, Upworthy was forced to begin creating original content, which quickly allowed the company to get back on track and revitalize its subscriber numbers. The Upworthy saga, as it turns out, is perfect anecdotal evidence as to the power of original content and dozens of brands, blogs and companies would benefit from taking notice. 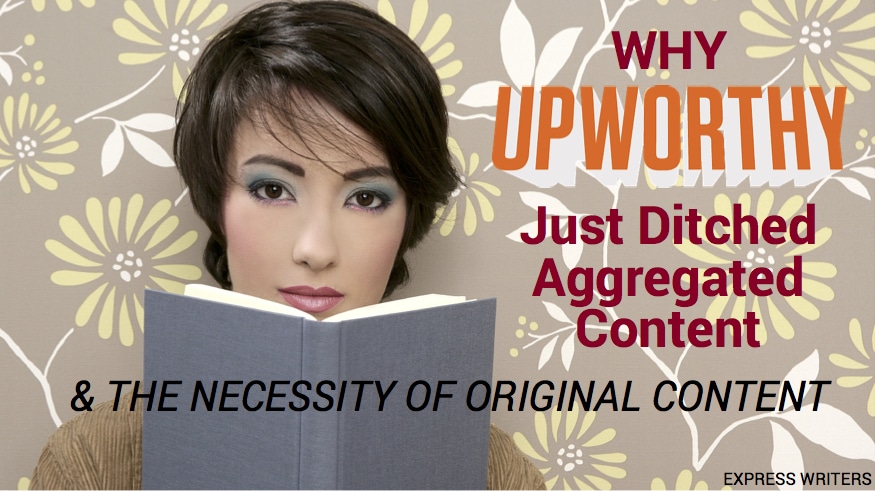 Upworthy’s hand was forced – and now they must play the original content card.

Aggregation is the act of gathering together existing content and repackaging it for new use. Although it is a royal flush in terms of convenience, it’s not ultimately a sustainable tactic, as Upworthy recently learned. The reason for this is that aggregation relies heavily on sensationalism. In order to be effective, aggregated content needs to be sensationalized enough to draw clicks and shares.

This process of sensationalism often entails taking run-of-the-mill content, affixing a jolting, curiosity-grabbing and sometimes misleading title to it and then pushing it out onto the web. Before its recent turnaround, Upworthy did this very well.

Upworthy has long been known for its carefully crafted headlines. They are immediately recognizable: long (often up to three sentences) and demanding, these headlines call upon people to recognize a social or cultural injustice, click for a miracle cure, learn an incredible secret in six seconds or simply to be amazed by a video display of human compassion or ignorance.

It is obvious that Upworthy’s headlines follow a carefully crafted format and are geared towards eliciting the maximum amount of reader response in the least possible time. An example of Upworthy’s sensationalist headlines was included in the Fall 2013 roundup of the site’s most shared articles: “This Amazing Kid Just Died. What He Left Behind is Wondtacular.”

This headline is a perfect example of the baiting and hyperbole that underlies aggregation. Although the practice of sensational headlines is misleading and often criticized for being exploitative and underhanded, tying dramatic headlines to dull, aggregated content was wildly successful…until it wasn’t.

Upworthy began to realize the dangers of aggregation when its content began being filtered by Facebook’s spam guards and the social media platform moved toward auto-play video. When this resulted in a massive drop in readership, Upworthy realized it was time to take a tip from the Phoenix and rise from the aggregation-induced ashes. They did this by making the radical and very wise move from curation to content.

Thanks to its previous position as a powerhouse of the curation and aggregation field, Upworthy had a unique and intimate understanding of what its readers and subscribers would relate to and choose to share and they brought this understanding into their mission to create original content.

While the company still deals heavily in video, the videos are now methodically framed, edited and distributed so as to invoke the highest possible emotional response from readers. Additionally, Upworthy now has a team of writers on hand to craft original content.

The reason for Upworthy’s switch to original content comes down to the fact that aggregated content is easy to copy and, with so much content flooding the net on a daily basis, being easy to copy is a death sentence. As Upworthy gained popularity, other sites caught on and began applying Upworthy’s viral headline format to their own content, which lead to Upworthy being outranked and overlooked in favor of the copycats.

While aggregated and curated content is easy to copy, original content is not, and Upworthy was forced to take notice. Upworthy’s transition toward original content was first reported in June of 2015 and, since then, the company has enjoyed an uptick in traffic. This goes to show that, as the web at large pushes harder and harder to move away from mass-produced, shallow content, and Google continues to update its algo software to versions like Panda and Phantom, sites that produce original content are more likely to take the lead.

While aggregated and curated content may be easy to produce and capable of attracting a huge number of readers in a short period of time, it is not a sustainable system and ultimately runs like a boom and bust economy. Spammy content only works for so long and, eventually, spam filters, reader preference and the press of high-quality content will catch up.

While it may seem like a quick road to readership, aggregation and curation are not in a company’s best content marketing interests. If there’s one thing we can learn from the Upworthy saga, it is that there are no free lunches and companies, brands and blogs are much better served, in the long-term, by outfitting their brand with high-quality, original content from the get-go.

9 Lies SEO’s Are Still Telling Themselves