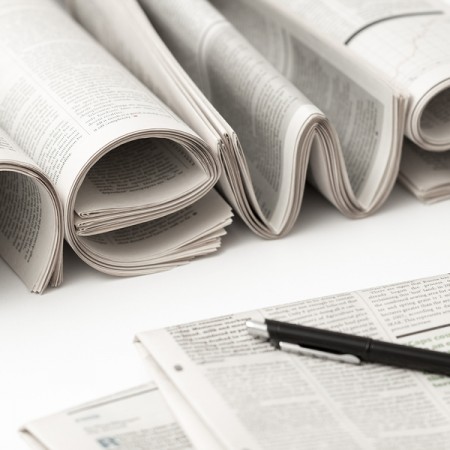 The Power of the New Press Release

Critics have been questioning the future of press releases for years. And sometimes it seems like the naysayers could have a point. With constantly changing Google algorithms, the immediacy of microblogging, and the effortless accessibility of information on the Internet, it can be easy to be swept away in the sea of doom and gloom. But have no fear. Doom and gloom, have no place in press release discussions. No, instead of “RIP press releases,” we say, “Long live this straightforward and news-worthy content!” (Sorry, not the catchiest chant, but stick with us, ok?).
In fact, we believe with solid, well-written copy and an effective distribution service, this “What, When, Who, Where, How and Why”-centric article format could be one of the most powerful and far-reaching components in your company’s communication strategy.

Wait, What is a Press Release?

But we do need to pause and make sure we are taking a modern, savvy approach to this very worthy tool in our copy toolbox. In a world of social media and blogging, it only makes sense that press releases, a stalwart in the media world since the early 1900s, must also continue to evolve with the latest communication channels. It’s not time to leave the mighty press release behind. Rather, it’s time to figure out how to incorporate each press release seamlessly into the rest of your content campaign.
According to Entreprenuer.com, a press release is a “public relations announcement issued to the news media and other targeted publications for the purpose of letting the public know of company developments.”
And we agree, although we’d like to expand the definition a bit. In addition to “news media and other targeted publications,” we’d like to add that modern press releases should also be written with influential social media users and bloggers in mind. That’s right – today’s press release should have more in common with a postable article than a stuffy, formatted disclosure of facts.
So here’s our definition of a modern press release:

The New What, When, Who, Where, How and Why of Press Releases

You may be sick of hearing this from us, but we will never EVER stop saying it. Quality content is crucial. Crucial to your readership. Crucial to how people interact with your content. Which finally, is crucial to your all-important search engine results. (If we could figure out another way to drive home the crucial-ness, we totally would. Because it is…well, you know).
Press release content is no different. Quality content is king in this realm, too. This is because the audience (more on that in a second) expects a specific format and impeccable grammar.
Traditionally, in a well-organized press release, the key details of the event were addressed in order of importance. That’s it. No embellishment. No sales-y pitches. Just the facts in a succinct, well-researched manner.
Today, many of the same press release standards are in place. The easily accessible facts are a must. The absence of sales-speak is just as important. The format – mandatory. But in the fast-paced Internet world, where an online magazine or blog may grab your press release in full, a few updates are in order. Dry content is out. Engaging readability is in. Here are just a couple of our expert press release tips.

You’re right, both convey the same information, but one has you ready for more, while the other is equivalent to a copy desert – dry and without hope. So garner your press release — and thus your store opening — interest with click-enticing headlines.

And remember, even if your article is not picked up in full, these facts provide a much-needed backbone for potential news articles, blogs and social media updates. We’ll show you how to effectively bring social media into the mix in a moment. But first…

When — What kind of event calls for a Press Release?

First and foremost, a press release must be news worthy. Don’t waste people’s precious time and patience with bland announcements. Reserve the power of the press release for true, industry-rocking events, milestones, or projects. The same computer company who used a press release to spread the word on their groundbreaking store can also use a press release to communicate:

Avoid tactics like scheduling weekly releases. In the absence of true news, you’ll likely have to resort to unfortunate hyperbole — “We’re the ONLY ones with mouse pads” — about mundane things. Also, don’t use a press release to spread bad news. Much like an attention-grabbing headline, the subject matter must be intoxicating enough to stop people in their tracks.
To keep your content strategy on track, before you order a press release, ask yourself a few questions:

If an answer to any of these questions doesn’t readily come to mind, you may need to hold off on an official release and downgrade to a tweet or blog post instead.

Traditional: Press releases were (and are) written for reporters and editors in hopes that they would, in turn, write a news story about your big event, milestone or project. This is why press releases must be to the point (300-500 words), easily scannable and in the approved PR format.
In the wake of shrinking media departments, press releases are actually needed more than ever. A well-executed press release offers time-crunched journalists all the information they need for your business’ story on a silver platter. Just remember, shoddy writing will land your release in the trash bin as fast as a boring headline will be ignored by a scrolling Internet surfer. In a crowded reporter’s inbox, one typo could be the death of THAT press release, at least.
Modern: Reporters still produce news stories, but they aren’t the only people or entities who wield the public ear. A well-crafted press release, with its fact-rich introduction, meaty quote and stat-filled copy, and company-highlighting boilerplate, may hit a blogger, influential tweeter or niche Google+ circle at just the right time. Our increasingly connected world (Google, social media, blogs) only helps press releases gain greater reach. They may not be used verbatim (likely won’t) but your name and your story can still get out there.
With an Internet audience in mind, it may be tempting to pad your copy with ill-fitting keywords. But don’t. Not only are you ALWAYS supposed to be writing for people, but also Google has become wise to link building schemes. This isn’t cause for sadness. Instead, let it encourage you to create quality content to get those facts out there! The International Manufacturing Technology Show (IMTS) offers a couple general rules to keeping both Google and your readers happy.
1. Keep your links down to about every 100 words or so.
2. Include only one anchor-text link in the product’s name

Where — Venues to Spread the Word

Social media is conversational and emotional. How does that fit with a press release and its no-nonsense format? Using strategic planning, here’s how the Internet and press releases can make a fabulous pair.

She argues that just posting the headline will seem spammy and not get your message anywhere. We tend to agree. Social media is supposed to be social first and foremost.

How — How to Distribute Beyond Your Networks

Ok, how can you reach even more folks than your own social media networking will allow? It’s hard to compete with the number of media eyeballs you can get in front of by sending your press release to a distribution service like PR Newswire.
The Power of Distribution:
With a rich, 60-year history, PR Newswire has amassed a huge, dynamic media audience. Have a story with international ramifications? They have nearly 50,000 distribution points abroad, plus translation services. And with 10,000 U.S. news outlets, they have your domestic stories more than covered as well.
Targeted Audience:
Using PR Newswire’s network is not like shooting in the dark. They are able to specialize the audience from communicating with an entire industry down to contacting an individual reporter.
Social Edge:
PR Newswire also realizes the power a tweet or Facebook post can have. If that is where your audience hangs out, that is where they will market your release. They will also distribute tweets to industry relevant feeds.
If you can find a company with an ample supply of professional press release writers on deck, access to distribution services AND quality social media management packages, then you, my friend, have hit the content campaign jackpot.

Press releases are still a key way to make sure your news is distributed in a timely, attention-grabbing manner. New technology has not decreased the relevancy of the press release. It’s just given you more ways to get the word out. From clever tweets to visually engaging content, social media and blogging can work in your press release’s favor.