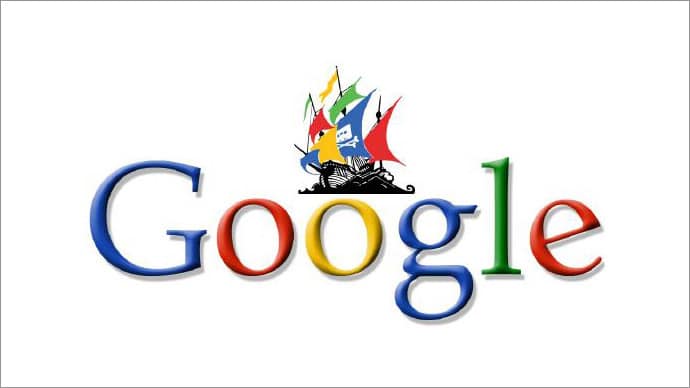 Argh, me mateys! There be fewer torrents ahead!

Who doesn’t love pirates? Google, and those of us who take pride in our creations from movies to music to content. We’re not talking about spunky and sometimes spooky fantastical characters. We’re talking about real, live cyber pirates who hand users illegal versions of programs, movies, music, and more. We’re talking about repeated copyright infringers, the thieves who make off with our content and spread it about the Internet. According to a recent Torrentfreak report, the latest Google Pirate update has had a noticeable impact on many torrent sites.

Most of us have heard of torrent sites, but unless we’re big downloaders, we probably don’t know much about them. A BitTorrent is a protocol for peer-to-peer file sharing. BitTorrent protocol distributes huge amounts of data over the Internet. Torrent files can be anything from legally sharable software, like OpenOffice, to highly illegal shares, like cracked copies of Adobe Photoshop or pirated movies and music.

According to Searchmetrics, Google has been repeatedly criticized for “not doing enough against Piracy.” The nature of the Internet makes it next to impossible to police the proverbial waters effectively. It’s been argued that there’s no proven means of halting piracy on the high cyber seas, but Google’s Pirate update appears to be a step in the right direction.

Since the update released at the end of October, popular “pirate” sites—BitTorrent and torrent sites—have seen massive drops in search traffic. It appears that the search engine giant is “policing” the high seas by deterring search traffic from locating these sites in the first place. Search Engine Land’s coverage of the update included the following screen shot of the SEO visibility for the site torrentz.edu: 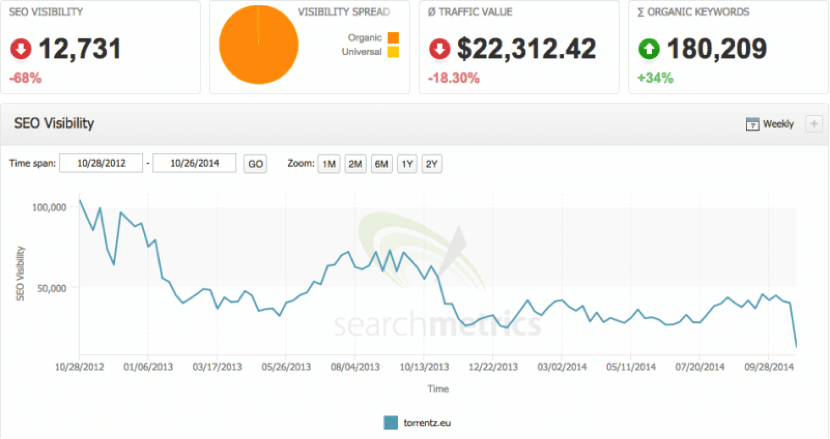 According to Wikipedia, as of 2009 peer-to-peer torrent websites collectively accounted for an estimated 43 to 70 percent of all Internet traffic, depending on geographic location. Jump to February 2013, and these websites are suddenly responsible for 3.35 percent of all worldwide bandwidth. This is more than half of the 6 percent total bandwidth dedicated to file sharing.

There’s no denying that the distribution of pirated material has grown rampant. One might argue that it is virtually out of control. And it’s not just torrent sites that are the problem. Any site can be guilty of stealing content. Some event claim stolen content as their own. The Internet is so massive that it’s almost impossible for copyright holders to track down and report all offenders, but the incentive to do so just grew.

Google’s Pirate Update 2 works much like Panda and Penguin. Leveraging the data and queries collected by the first Pirate update from two years ago, Google’s new and improved swashbuckler is smarter than ever. You might say this buccaneer is sat proudly in the crow’s nest, actively on the lookout for copyright infringements. Any site where it spots a violation receives a huge drop in rankings. In some cases, sites are completely removed from search results.

But Google’s not just spotting and dropping copyright infringing sites. The king of the cyber seas is applying real, verified complaints and reports to the algorithm. Any site with a filed report through Google’s DMCA system will be the recipient of a sizable drop in rankings. The site risks immediate removal from the SERPs.

According to Searchmetric’s analysis, affected site are not receiving a mere slap on the wrist. You might say these sites are being made to walk the plank. Some have seen a 98 percent loss in SEO visibility, which is enormous. So far, it’s been unauthorized television and movie sites, peer-to-peer torrent sites, and various free download websites that have taken massive hits.

Are You in the Bullseye?

The good news, at least for most of us, is that Google’s Pirate is on a precise crusade. It seeks to spot and slash piracy websites. The current reports indicate that only mass download websites and those blatantly guilty of copyright infringement are being hit. It’s been about two weeks, and we haven’t seen any indication that there are bystander casualties.

Chances are you’re not in the Pirate’s bullseye. However, there’s certainly nothing wrong with making sure that you’re not ever skirting the outer edge. After all, the websites hit by the swashbuckler are getting hit hard. Your goal should be to hold to best practices:

The best way to avoid the Pirate’s wrath is to avoid copyright infringement. Google is continuously improving their algorithms. We’ve seen the results in updates to Panda and Penguin. Spammy, low quality websites are being steadily weeded out of search results. As a stauncher stand on Internet piracy is taken, we can expect to see future updates to the algorithm. Keep your nose clean of copyright infringement; avoid distributing media and content without permission and credit, and you should be clear to keep sailing the cyber seas.