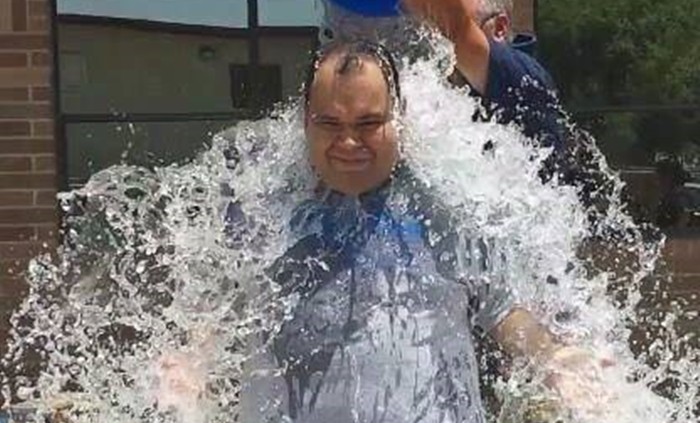 The ultimate goal of content marketing is to draw attention. The signal of successful content marketing is when that attention results in action. The ALS Ice Bucket Challenge has literally iced out content marketing, providing one of the most incredibly perfect examples of the legendary power of compelling promotion for 2014. There’s a great deal for marketers and business owners to glean from this trending phenomena.

How It All Began

Would you believe that the popular challenge did not start out as an ALS Association fundraiser? According to Geoff Herbert of Syracuse.com, the roots of the phenomena date back to last winter when professional golfers were on a mission to gain support for various pet charities. According to The Guardian, the ice bucket craze hit the national radar when golfer Greg Norman issued the challenge to Matt Lauer, host of “Today,” and he accepted on live television.

The challenge comes with simple rules. Once received, you must make a video of dumping a bucket of ice water over yourself, post it online, and then tag Facebook friends and family, challenging them to do the same. Per the rules, you have 24 hours from being “nominated” to take the challenge or your subsequent forfeit demands a donation of $100 to a cause of your choice. The challenge has gone viral, and ALS has become the overwhelming standard.

What’s the connection between ALS and ice water? Just how did it become the overwhelming standard? It all goes back to the family of Pete Frates, a baseball player diagnosed two years ago with ALS. Their campaign fueled the standard and the results…well, they speak for themselves! Let’s consider the scope of this event.

Icono Square Blog has been tracking the challenge since it went live on TV via Matt Lauer back on July 15, 2014. Using their hashtag tracking tool, they tracked the number of mentions of the two official hashtags: #icebucketchallenge and #alsicebucketchallenge. After logging a total of over 3 million posts, they broke the mentions down per hashtag: 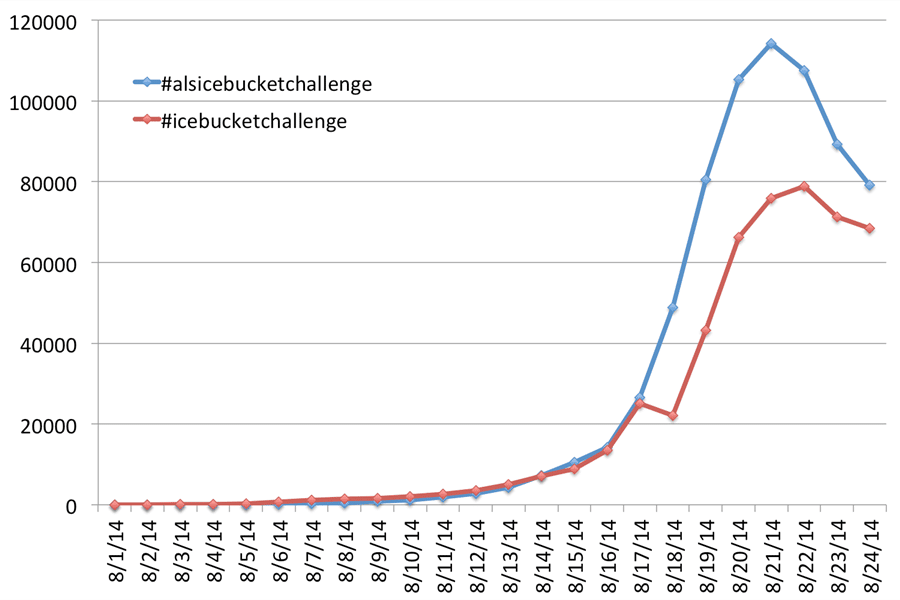 Geologically speaking, the mass response to the ALS ice bucket challenge has been primarily rooted in the United States. But it has spread globally with participants from Canada, the United Kingdom, Turkey, Brazil, Israel, Lebanon, Hong Kong, China, and Malaysia. Icono Square Blog also graphed geological stats per hashtag, which show the massive response from the US:

Just who has participated in the challenge? The support from some of Hollywood’s favorite celebrities has greatly contributed to its success and viral natural. A few of our favorites who have accepted and passed on the challenge include Robert Downey Jr, Oprah, and Steven Spielberg. And who can forget Tom Hiddleston’s nomination of Benedict Cumberbatch (television’s Sherlock), resulting in this hilarious continuation of the challenge that really captures the fun and reminds nominees to be punctual:

Even Google Jumped On Board

We all know Matt Cutts. He’s the Google guru. We track his tweets and stalk his site because he’s the go to guy for the latest and greatest Google news. He’s the first and last say on almost everything SEO, and when this guy does something, it’s usually followed by everyone and their Uncle jumping on board.

On August 22nd, Matt did his challenge and nominated members of the search quality team, including Brian White, Evan Roseman, and Michael Wyszomierski (aka Wysz). Not only did he say he’d write a check to donate, but he also “earned” his nominations:

With so many credible folks jumping on board, and the results of new awareness raising such a large donation total thus far, there’s just one unanswered question:

Are You Icing Out?

Don’t worry! We’re not going to ask if you’ve accepted the challenge and dumped a bucket of ice water over your head to raise ALS awareness. We’re not even going to ask if you’ve donated. But while we’re on the subject, if you haven’t at least donated to this profound cause, swing over to the ALS Association’s website and make a donation—every penny helps. And if you’ve accepted the challenge and caught it on film, feel free to share your awesomeness with us in this blog’s comments or via our social media.

The truth is the ALS Ice Bucket Challenge has been a legendary example of epic content marketing in action. Crowd-based business models and marketing aren’t anything new, but this challenge has shown the potential benefits for non-profits. The question we’re asking is whether you’ve “iced out” your content marketing this year? And as we fly toward yet another new year, are you going to grab the takeaway lessons from the ice bucket challenge that can bolster your marketing plan?