false
You are here: Home / Social Media / The Snapchat Rage- Should Your Business Be on SnapChat?

You’ve probably heard of Snapchat: the funky video messaging app that allows your friends to send you ten second clips of the action at Walmart or a dog doing something funny.

But did you know that Snapchat is good for more than just hilarious and short-lived videos and photo? In fact, hundreds of companies are getting in on the Snapchat revolution and some experts are even calling it the future of social.

Gary Vaynerchuk, a top marketer, entrepreneur, and someone I like to follow regularly, says that “every marketer should at least be familiar with Snapchat.” He’s also warned us: “don’t be on the wrong side of history,” and “get into Snapchat before you miss your chance entirely.”

This begs the questions “Why?” and “How?” and, in the face of other popular livestream apps like Periscope and Meerkat, “Is it really worth it?” 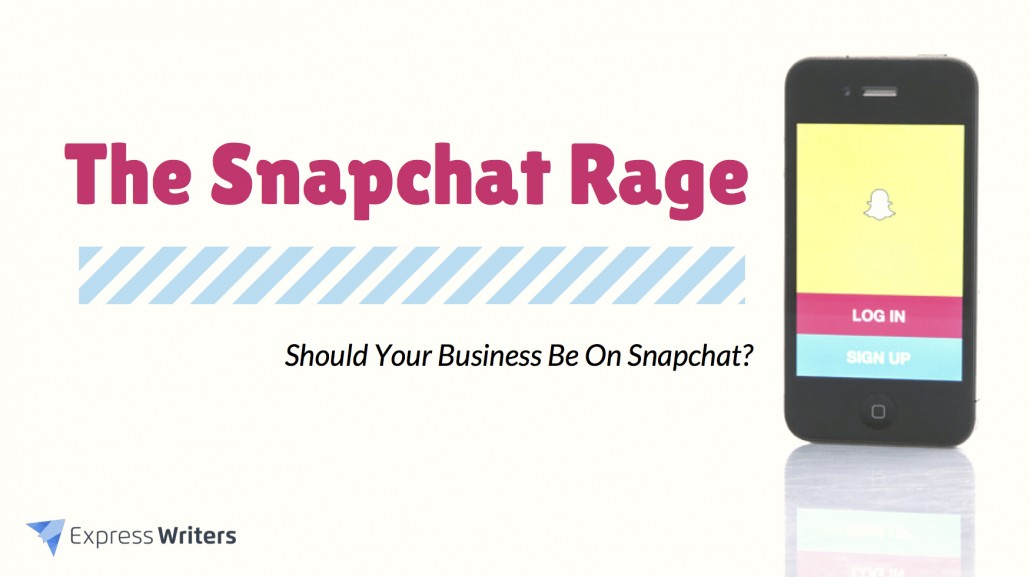 The Snapchat Rage: Worth it or Not for Businesses?

Here’s what you need to know about the Snapchat revolution.

Snapchat by the Numbers

According to NewsCred, Snapchat might be quite a bit bigger than you thought. The service currently has more than 100 million daily users and upwards of 8,796 photos are shared every second on the Snapchat platform. What’s more, users watch an average of 6 billion videos every single day and 54% of users engage with Snapchat daily.

With all that traffic, it’s no wonder that companies are beginning to flock to the app. NewsCred goes on to report that a huge 30% of agencies, brands, and media planners are planning to include Snapchat content in the advertising campaigns they run surrounding the Super Bowl. One of the reasons Snapchat is becoming popular among so many brands is the fact that it is incredibly user-friendly.

For example, vertical viewing is now one of the most popular forms of mobile interaction and it accounts for 29% of the total time people spend on their screens. Because Snapchat was born in the world of vertical viewing, it’s hugely popular among people who consume video content on their phones. In fact, Snapchat users are nine times as likely to watch ads in full on the platform simply because they don’t have to rotate their phones.

Snapchat is and has always been dominated by Millennials. The platform was founded by a 24-year old and Millennials account for upwards of 71% of the Platform’s regular users. This is important due to the fact that Millennials are currently the most powerful market group in the world, with an annual spending power of upwards of $2.45 trillion.

What’s more, Millennials are the largest group of smartphone owners in the U.S., with more than 85% of the population owning smartphones and 41% of them using their smartphones to make purchases on a regular basis. Thanks to the instant-access nature of Snapchat, it’s clear that this app may be one of the best ways for marketers to gain access to the lives and pocketbooks of Millennial customers.

How Companies Use Snapchat: The H&M Example

Now that it’s clear why Snapchat is such an appealing way for companies to deliver content to a younger audience, let’s consider which companies have already used the platform effectively. For an example, consider H&M Poland.

H&M caters to a predominantly Millennial group of customers, but they took their already effective marketing one step further when they recently partnered with an exclusive party organizer called Boiler Room. To publicize the partnership, promote engagement with their “H&M Loves Music” line, and draw customers to an upcoming event, H&M used Snapchat to launch the first ever “Urban Chase” campaign in Poland.

To do this, the company hid tickets to an upcoming sold-out Boiler Room event in their stores and then used Snapchat to dispense messages and hints that would allow a few of their lucky followers to find the tickets. This simple strategy not only publicized the event, but it drew users to H&M’s Snapchat account and provided a ton of positive publicity for the event. In fact, H&M gained 943 Snapchat followers through the campaign, enticed 200 people to participate in the game, reached 3.8 million unique users, and earned 344,000 livestreams. If that’s not brand success on Snapchat, I’m not sure what is.

The Verdict: Is Snapchat Worth all the Buzz?

For companies who want to find a successful means of displaying ads, distributing content, and engaging with the Millennial audience, Snapchat is a fantastic platform. While social media platforms are popping up everywhere nowadays, Snapchat has exhibited its staying power: It’s currently the third most popular social app among the Millennial market and it shows no signs of phasing out anytime soon.

When thinking about Snapchat, it’s also wise to consider the fact that, even though social media platforms continue to change, the rules of engagement within them do not. To put it another way: Snapchat is indicative of a trend that’s been building for years – successful content in today’s marketing environment is consumer-driven. While the technology used to deliver that message may change in the coming years, the rules of the game won’t, which means that Snapchat is a fantastic place to hone marketing skills and connect with users right now.

While there are certain companies for whom Snapchat may not be a good fit (those targeting an older marketing group, for example) the H&M example goes to show that companies targeting a Millennial audience can do well to begin engaging on the platform.

In today’s world, consumers want to interact with their favorite brands via social media and Snapchat is an innovative and effective way for companies to provide that. Within the next several years, it’s likely that we will see Snapchat continue to evolve. The platform will likely begin to offer new services and marketers who want to be successful in the Millennial market will need to creatively adapt their marketing strategy in order to provide quality Snapchat content their users will love.

Need social media content and/or management for your brand? Check out our Social Media Services!

#ContentWritingChat February 2 2016 Recap: How to Use Periscope and Live Video...