false
You are here: Home / what is GPT-3

As a writer myself and the owner of a writing agency, artificial intelligence (AI) has been after our jobs for a while.

Can it be done cheaper? By a robot? …For less money?

Time and time again, the answer has been no. I even wrote a two-part series a couple years ago for Content Marketing Institute, debunking the myth that robots can write content and replace a real, human, breathing writer.

Today, technology is growing at a faster pace than ever. From manufacturing to rote office tasks, we’re finding AI replaces human workers in practically every industry. Anyone working a rote or repetitive task is quickly seeing him or herself replaced by a machine. In fact, AI expert Kai Fu Lee believes as many as 40 percent of the world’s jobs will one day be automated.

With the launch of GPT-3 in May 2020, many people think it’s possible.

Before you panic, however, keep reading. I’m taking a closer look at what GPT-3 is, how it’s causing us to rethink content, and why artificial intelligence will never replace certain activities – particularly those that rely on human creativity.

Is AI in the form of GPT-3 coming for our content writing jobs in the near future? 🦾 @JuliaEMcCoy doesn't think so. Get 5 major reasons why, now on the Write Blog ✅ Click To Tweet 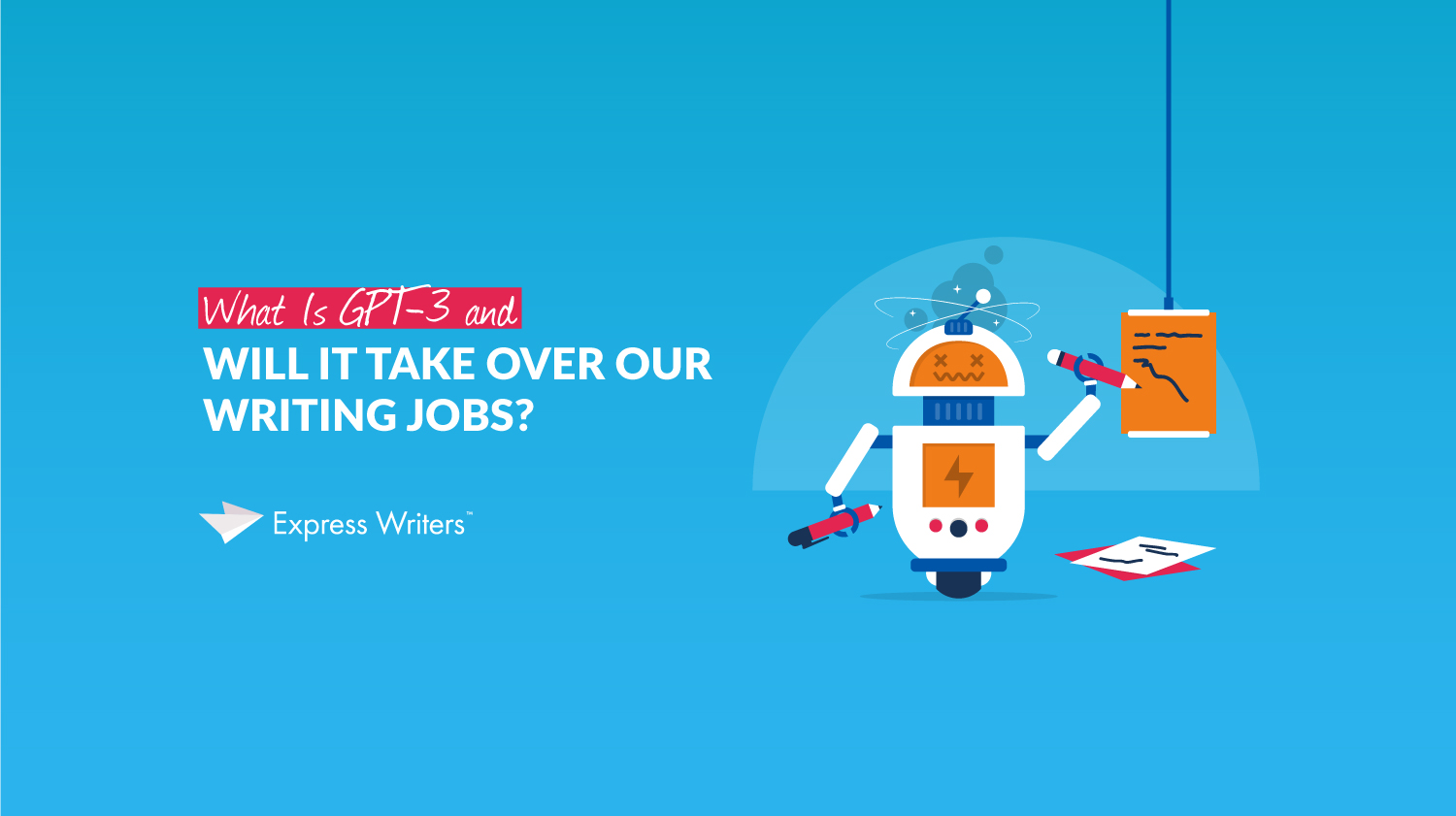 GPT-3 is the third edition of GPT, which rolled out in May 2020. In July 2020, OpenAI announced the creation of its waitlist for access. Those encouraged to sign up include entrepreneurs, academic researchers, or members of the general public interested in becoming beta testers.

Transformer-based AI language generators have already been around for a few years, first appearing in 2017. OpenAI GPT appeared in 2018, and the upgrade, GPT-2, was released in February 2019.

Compared to OpenAI GPT, GPT-2 was a sleek and sophisticated model with some 1.5 billion parameters for constructing text. At the time of its release, OpenAI noted GPT-2 was “probably too dangerous to release” but it had “seen no strong evidence of misuse so far.”

GPT-3 is two orders of magnitude more powerful than GPT-2, with 175 billion parameters. It’s better equipped than any other AI model out there to spin out realistic, convincing text.

And it does. Check out this pop song by Taylor Swift about Harry Potter… 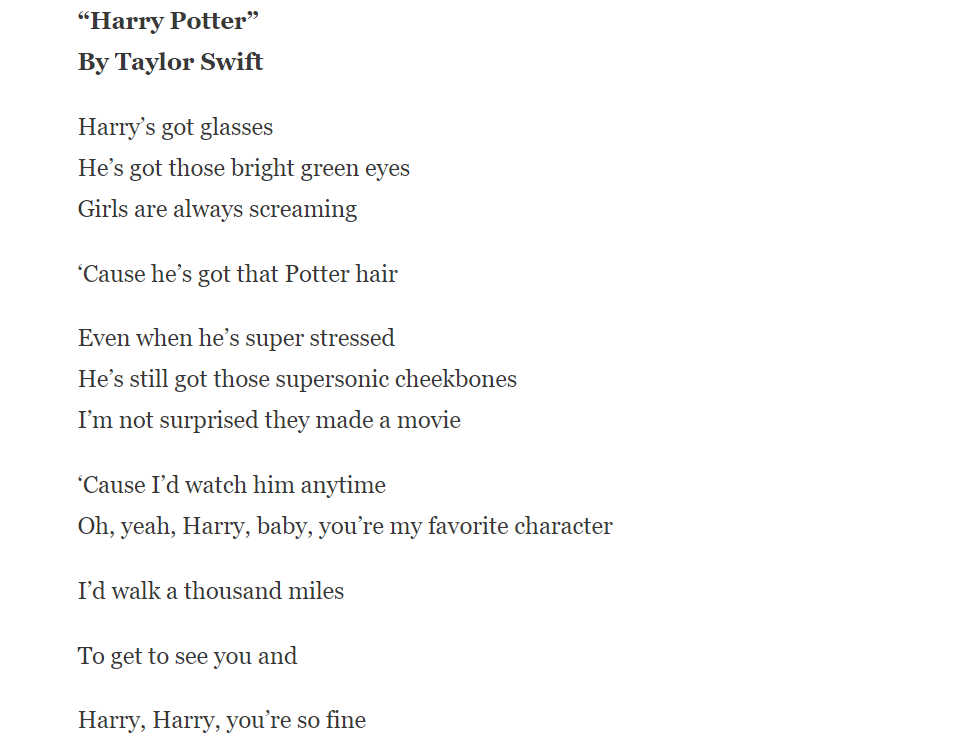 (If any of those words sound familiar, it’s because I’ve talked about them briefly before. Google now deploys NLP to better understand search intent – that’s what BERT was all about.)

Let’s break down what all of that means.

An autoregressive language model is a model that attempts to identify the next best word in a string of words based on the ones that come before.

For a very simple example, consider the first line of the Taylor Swift song above.

We know in English that all sentences follow a certain structure: it’s usually something like “subject – verb – object.”

If we start with a subject – the most obvious choice being “Harry” – then we know that the next word needs to be a verb.

Sure, we could shove any verb in there. That’s not how our brains actually work when we’re writing. However, in autoregressive modeling, the algorithm will only consider the word(s) before. Right now, that’s our starting point.

So, Harry. Harry what?

That “Harry’s got glasses” ended up being the first line is random. It could have just as easily spit out “Harry’s got a scar” or “Harry’s got books.” We’ve clearly been given more data about Harry and his physical features.

As a result, the grammar and context are both correct. The lyrics feel genuine.

That’s a major step up from what AI could do just three years ago when I tested out another model. Given the subject (content marketing) and some basic data about it, the AI returned this brilliant gem of utter nonsense:

In 2017, it was much easier to laugh at the idea of AI taking over things like creating news stories, wiki articles and – yes. Web content. But if you’re looking at that Taylor Swift song and getting an uneasy feeling in your stomach, you’re not alone.

Why Some Fear GPT-3 Will Make Writers Obsolete

GPT-3 was specifically built to create realistic, convincing text – and it does exactly that. In fact, some people have already attempted to use it in content writing. Will that make writers in this industry obsolete? Here’s why some people think so:

But really. If you’re a writer with any skill whatsoever, AI is not coming to take away your job.

If you’re a writer with any skill whatsoever, AI is not coming to take away your job. 🤖 Learn 5 reasons why via @JuliaEMcCoy Click To Tweet

In July 2020, Vox described GPT-3’s ability to churn out convincing content as “uncanny.” Arram Sabeti’s experiment likewise raised questions about whether AI could soon be good enough to eliminate the need for human content writers.

AI excels where there’s lots of data that needs crunching and tasks are rote – news article writing satisfies both of these requirements. If you give AI data (facts), and parameters (article structure), you’ll get a news article that reads convincingly.

Sure, there’s an entire site dedicated to the creative fiction of GPT-3. But if you read through it, you’ll notice a few distinct things:

Is that really creativity?

Human-crafted writing varies. Flowing from one sentence to the next, it uses a wide mix of structures and lengths. So far, GPT-3 has shown that’s not super possible. At the end of the day, you can tell. 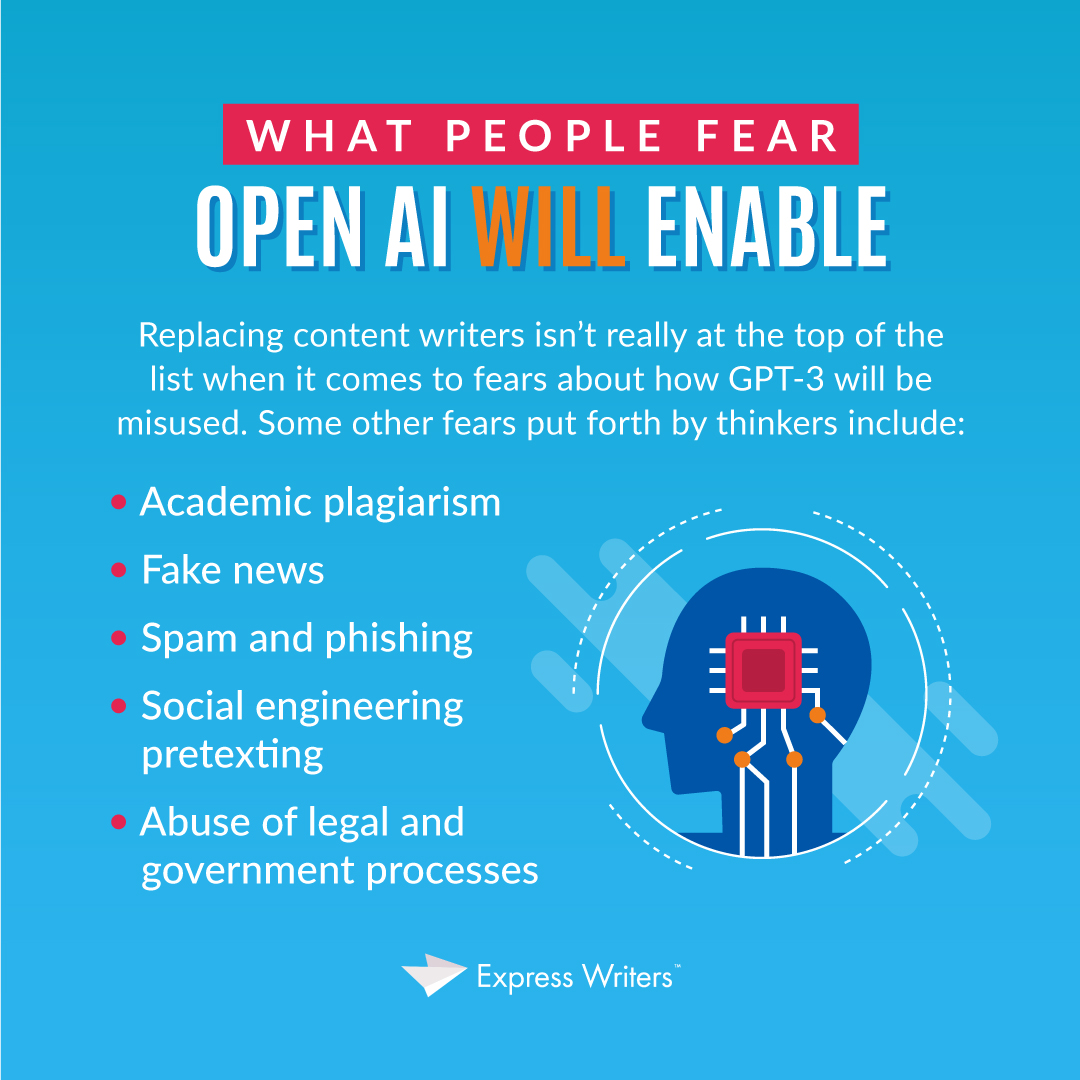 3. Robots Suck at Emotion. And Context.

Content writing isn’t just about putting buzzwords on a page where people are most likely to see them or stuffing articles full of keywords at specific intervals.

In the 2020s, content writing has leveled up. You’re now expected to care about angles, to connect with your readers. To tell stories.

Research overwhelmingly shows that emotional connections work when it comes to converting readers into paying customers. In one study, a major bank successfully improved its conversion rates by 70 percent by rebranding a credit card from an emotional angle.

Good luck getting AI to hook your readers by the heartstrings. It’s an age-old cliché – robots have no heart.

Sure, there are facts. Sure, having statistics in your content can help you demonstrate more credibility and authority.

We even have a lot of statistics showing how to do content correctly, especially blogs. But when it comes down to it?

Things that are data-oriented tend to have specific processes, procedures, and methodologies. Content writing – while certain structures might exist – doesn’t really have any of those. It’s still a process that’s unique to the people who are writing it.

Professional content writing is creative, unique, and engaging – NOT stuffy or robotic. Unlearn the bad writing habits you don’t need and absorb the amazing ones you do to stand out: Click here to learn more about the Unlearn Essay Writing course!

5. If You Could Be Replaced, You Were Already

If GPT-3 had been rolled out in 2008, content writers would probably be a quaint relic of internet history today.

That’s because in 2008, content writers were robots churning out pages upon pages of poorly written, keyword-laced gibberish designed to win positions in the SERPs.

If that was you, and you never progressed past that level, you’ve been replaced.

But if you kept pace with the industry and learned the skills content writers need today, then you have more work than you know how to handle. Content writers who can tell stories, connect with readers, and inspire conversions are as much in demand as ever.

GPT-3 is a fascinating development in the realm of artificial intelligence, and one that holds the potential to change the world. I’ve looked at what it is and why some people in the content writing industry fear that it may one day come for our jobs.

But don’t worry, content writing will always need a human touch because of the unique requirements that robots simply can’t recreate. Keep honing those content creation skills, and always remember to focus on the human – that’s what your readers want.

In need of exceptional writers to handle your content? Check out our content shop and get started with an expert writer today.