Have you ever wondered…what will blog writing be like 100 years from now? Will we see space aliens eating blogs, bring new meaning to “digesting” what one reads? Will writers be telepathically transmitting stories to paper? Will paper even exist—it’s on the way out the door right now, isn’t it? What the heck WILL we see; lots of green and UFO activity?

Let’s go BACK in time to think about the future. Dial the clock back 100 years from today and it would be the year 1914. What was writing like back then? It certainly wasn’t as we know it today. In 1914, World War I began. A lot of writers were reporters and journalists who put themselves in the heat of the action as one of the greatest wars to engulf the world revved up. 1914 was also a year of significant events in literature.

Writing 100 years ago didn’t involve handy word processing programs like Microsoft Word and WordPerfect. Spelling and grammar check wasn’t computer automated, it was left up to writers and editors to sort out. The rules of grammar were much more stringently held to, and reading literary works published between 1900 and 1920 reveal an astonishing evolution of style and the interpretation of the so called rules. Blog writing, social media and online content marketing didn’t even exist yet. Oh yeah, and personal computers and handheld mobile devices, they were pure fiction!

If things have changed this much in 100 years, what can the next 100 years hold?

Speculating About the Future of Blog Writing

We’re not exactly talking about a scientific topic, now are we? But speculating can be fun nonetheless. In the past 25 years alone we have seen an unprecedented improvement in technology, all of which has contributed to blog writing as we know it today. For example:

Before we had personal computers with word processing programs, we had something called a word processor. When I first started writing, I used a Brother Word Processor WP-230B—talk about a dinosaur! It could switch between a typewriter and word processing mode. It was pretty limited in capabilities compared to today’s computers, but it got the job done with better efficiency than handwriting or a traditional typewriter.

Enough reminiscing. Let’s talk about the future of blog writing, a huge topic as of late, particularly in the area of guest blogging.

In January of 2014, the blogging community held its collective breath as Google’s Matt Cutts declared the “decay and fall” of guest blogging while staples in the industry said guest blogging is not dead. There is truth in both opinions. Cutts’ is correct that spammy, bad quality guest blogging is dying. And as it should! The writing industry has always stood for quality, which is why bad quality writing on the Internet is ever so surely being replaced by high, editorial quality content.

It’s likely that in the following years we will see an increase in the quality of guest blogging as it returns to its roots. It will become more finely tuned, relevant, educational and engaging.

In just the past 5 years we’ve seen amazing changes in the realm of search engine optimization. Keywords are going, going, gone as a hardcore staple, which opens up blogging and other types of online writing to better flow, higher quality and just plain good writing. In essence, online writing is returning to the true roots of literature: telling a story and telling it well.

The Future of Blogging Is Bright

Let’s talk about the origin of the blog. Back in the day, blog posts were something anyone could whip up. They were opinion tools, a means for anyone who had an opinion of any kind to blurt it out to whoever took an interest and decided to read. Today, the landscape of blogging has radically morphed. Blog platforms offer a myriad of tools and social channels all designed to help you create and communicate something. Blogs now support audio and video and the comment areas of can contain anything from intellectual discussions to bunkering down in the trenches in an attempt to defend a particular thought or idea.

Blog writing is, and has always been, about self-expression. Today, the blog is a content marketing tool leveraged by the freelancer, small to medium sized business owner, and the big corporations. In the business world, blogs are used to communicate informative, relevant information. They’re a means of sharing thoughts and ideas via social media and stirring up conversation.

However, it’s still a powerful tool for the would-be writers who write for the sake of writing and self-expression. Once you step into the world of content marketing, you can easily lose sight of these almost pure forms of blogging. They’re still out there. They’ve been there since the inception of blogging, and it’s my bet that 100 years from now they’ll still be here. The would-be writers and folks who blog for the pure self-expression of it are often the pioneers who push the technology right along, but without the recognition companies and businesses receive.

According to ViperChill.com, over 181 million people actively use a blog platform. A lot of people are using their blogs to make money. Blogs can be highly profitable, and this legitimate form of making money will likely continue to grow in leaps and bounds over the next several years as more and more people find success.

Technology and Blogging – Where Will Be In 100 Years?

Ever watch Star Trek? According to IMDB.com, the very first episode of what would become a multimillion dollar franchise and fan phenomena, aired in 1966. Right from the start, the program almost seemed to predict the future. I stumbled across this humorous infographic style graphic from MindSlapMedia.com while writing this blog: 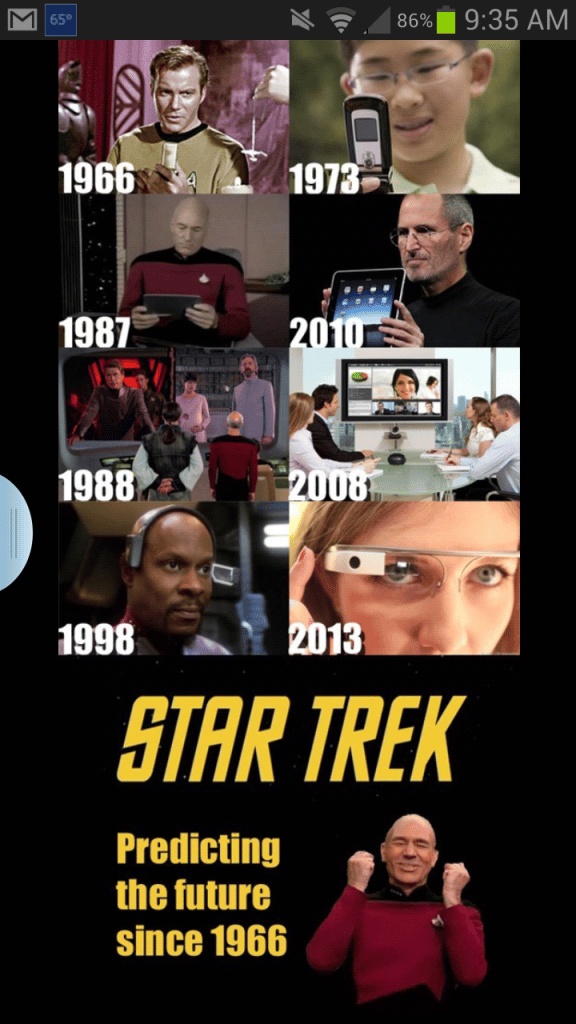 I just had to share this because it demands appreciation, whether you like the show or not! In 1966, Captain Kirk was using a wireless handheld communication device that the masses got their hands on in 1973, the cellular flip phone. In 1987, Captain Picard was using a computerized pad that gave him Internet-like access at his fingertips. In 2010, we saw the release of the revolutionary iPad—and for those of us who even glanced at the Star Trek series, we instantly felt like we were taking a huge technological step forward.

In 1988, Star Trek: The Next Generation displayed a visual three way conference. What a concept! In 2008, we were able to video conference by using modern video technology in conjunction with the Internet. Finally, in 1998, Captain Sisko from Star Trek: Deep Space Nine was using a head display that operated like a window. In 2013, Google released Google Glass.

Did Star Trek predict the future? The answer depends on who you ask. But here’s the KEY point to take away: if humanity can dream up a new form of technology, we have an unparalleled way of eventually creating it.

The Future of Blogging Is Limited Only By the Imagination

There’s no way to predict exactly what blog writing will be like 100 years from now. It’s safe to say that new and improved tools will be implemented as technology continues to advance. Who knows? 50 years from now we might be slapping a transmitter to our temple and thinking our blogs onto the computer screen. Keyboards might be a thing of the past as we use mental power to write, edit, post and share a blog!

Will aliens be reading our blogs in 100 years? You never know! For years we’ve joked about aliens receiving our radio signals and tuning in to our world from a galaxy far, far away. If they are, it’s a fair assumption they’re tapping into our Internet and perusing our blogs. Who knows, maybe they ARE eating blogs and digesting them in ways we never thought possible.

The truth is we have no idea just how blogging will evolve. But one thing is an absolute certainty: we write to tell stories. We write to express ourselves, share ideas, inspire, inform and even destroy. The core purposes of writing haven’t changed in the last 100 years, and it’s doubtful they’ll change in the next 100.

Years ago we said that the pen was mightier than the sword. Today, we use electronic means of writing over the good old fashioned pen and paper. Some of us (the very brave) use voice recognition software to talk out our writing before editing it over; not really use the keyboard much as it is. 100 years from now, we just might be using our noggins in place of the keyboard and mouse.

Regardless of how we blog, our reasons wll likely stay the same. After all, we haven’t changed why we write since cave paintings: we’re all writing by whatever means we have to tell a story, to record something that we hope stands the test of time, and is still here for people to read hundreds of years from now.

Applying today’s Blogging to the Future

When it comes to the content marketing world, we’re betting that the future of blogging revolves around catering to what the audience wants. Right now, audiences want informative material. They want to type a search phrase into a search engine about “21 angry bird toys to buy” and receive relevant information designed to educate them before they make a purchase. People also want good story telling. They want to know why your company does what it does. How did you get into the business? Why did you want to be better than everyone else, and “I wanted to turn a profit” isn’t a viable answer!

Stories drive traffic today. Look at any company on the Internet. Look at yours. Publish a blog that tells a story, a good relevant story to your company’s niche. Will it increase readership and gain new exposure to your business? Chances are it will. Don’t believe us? Just try it. It doesn’t take long to write a 500 to 1,000 word blog with a catchy title, share it over your social media channels and watch the influx of traffic. Go the extra mile to start a conversation, and you’ll likely make connections with a crowd of new people, all interested in your business because of the story you decided to share.

People want to connect with what they read. It’s a sure bet that as we set foot into the next 100 years of blog writing, we’re going to see content that is designed to make a connection. We’re going to see tools that make it easier to create strong connections. Who knows, in 100 years we might have holographic blogs that put us right in the middle of the action, visually sharing a story or teaching us something new (for you Star Trek lovers, it sounds like the “holodeck,” doesn’t it?). Technological advances will likely be limited only by the imagination, which means in 100 years blog writing could be unrecognizable when compared to our “archaic” means of blogging today!

So, what do you think blog writing will be like in 100 years? Will blogs be publicized throughout the cosmos? Will they be the most popular form of literature on our planet? Will UFOs be stopping by for the latest installment from their favorite blogger? How will the technology change? Share your ideas by leaving a comment, and let’s see what happens!

SEO-Optimized Web Content: How Do You Optimize Without Overdoing It?