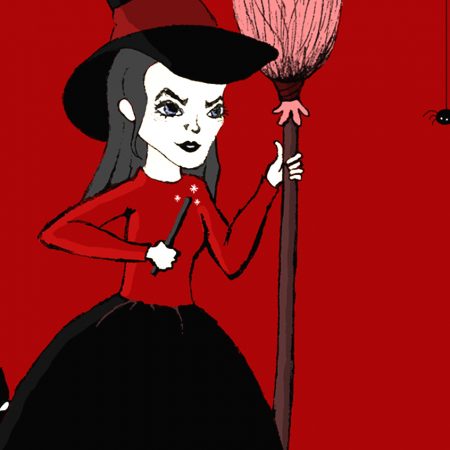 That’s what one big brand was spending per month on press release distribution, according to a study by marketing agency owner Tim Grice, posted on Moz in 2012.

For the past year now, at Express Writers, we’ve offered syndicated online press release distribution to all of our customers, at rates well below what our former news partner charged on their own site. Our clients got a good deal—and we felt happy to offer it to them.

That is, until this October—when we stood back and looked at the actual benefit of online, syndicated news. I even got two experts on the line to help me dig up solid truths about this industry. (I’m indebted to Steve Rayson at BuzzSumo for pulling metrics and data for me, and Tim Grice at Branded3 for an updated quote.)

Our findings weren’t good, by any means.

That’s why we’re calling our findings the wicked witch of online press syndication and turning it into a Halloween post.

Here’s the (in the spirit of Halloween—cold, dead) truth: if you’re paying for syndicated news, you might just be wasting every single dollar you sink into that channel.

Don’t just be frightened by the witch: know the facts and make an informed decision the next time you choose to put your money into syndicated news (or not).

The Story Behind the Study: What Inspired Me to Take a Deeper Look at Press Release Distribution

I’d noticed a pattern: in 2012, when we started offering distribution, I saw amazing, fast results in Google. For instance, one press release we did back then was about a stuffed toy. Their keyword, a solid, low competition long-tail, ranked #3 in Google in just days—the #3 result was their actual PRWeb release. Now that was value!

But I haven’t seen this happen since that day. And we’re talking out of dozens to hundreds of press releases that our team has written and distributed by now. On average, we distribute 6-10 press releases for clients in a month. We have so many clients that complain about the reports we send them. “This is all the data and results we get?” And the truth is: we didn’t really have an answer for them. The quality of the news results online was finicky. I’d see an online Fox station pick it up—and then it would be gone the next day, when I was ready to send the link to the client. Results weren’t permanent. And nothing showed in the first page of Google for their (great) long-tail news keywords.

The more I saw this happening, the more I realized I needed to research syndicated distribution. A bad feeling in my gut drove me to do it before we renewed our contract this year. And sure enough, what I found was pretty dire.

To make my research and findings official, I got in touch with my friend Steve Rayson, Director at BuzzSumo, for an exclusive study: and even got in touch personally with Tim Grice from Branded3.com, the author of the Moz piece, for some updated findings.

Let’s dive in to the findings.

Here’s what Tim Grice had to say, when I sat down with him to discuss his Moz post and what he’d say about online press syndication currently as it stands in 2016.

Julia: You shared your findings on how budgets are being wasted with online press release syndication, back in 2012. Would you say it’s become an even bigger waste of budget in 2016? Or have you seen brands adapting, and investing less in online PR?

Tim: The Moz post is specifically referring to online PR syndication (PR Newswire, etc). SEO agencies and in-house teams were using them as a primary link building channel, firing out boring stories that got absolutely no pick up and the online links created were from low value directories.

In 2008, it worked really well to game Google’s rankings: but by 2012, it should have been on its way out. Not so much. Link building was becoming difficult and it was the easy go-to option for many agencies.

Here’s the thing: if anyone is using syndication for links today, they should be fired.

Journalists are already inundated with companies offering up information for free, and there is no need to check a press wire.

Julia: Why is online PR a bad idea for a link building investment?

Tim: Online PR done right is not a bad idea, syndicating crap stories around the web for a handful of links on press wires is a terrible SEO strategy; no relevance, no authority, no trust. Creating genuinely insightful content or offering up unique data and selling it indirectly to journalists and bloggers is the right approach to online PR (done right, you can generate hundreds of high authority links from a single campaign).

Julia: Is there any good form of online syndication?

Tim: Not that I am aware of.

Julia: What is a much better way to invest revenue to boost your online marketing, instead of online PR?

Tim: Done right, online PR can return good ROI as well as high authority links, however the fact is that where you invest will depend purely on the gaps in your strategy.

From an SEO stand point, if you rank in the top five you’ve probably got enough links to be position one, and you should work on the technical side of it, CTR’s, mobile and great content.

BuzzSumo: What Is The ROI Of Press Release Distribution (Syndication)?

To further dig into the reality of how ugly the press release syndicated world is, I asked my friend Steve Rayson over at BuzzSumo to get some exclusive findings. He was happy to accommodate, and here’s what we found. Ready?

To wrap up our findings…

On average, press releases on the top two syndication sites get a measly 24 shares–total. Fact: 24 shares don’t equate to people actually reading, yet alone someone clicking a link in a release. Over 50% of URLs shared on Twitter are never clicked (BuzzSumo).

This PR was the most shared, according to BuzzSumo, coming in with 149,000 shares on Facebook.

Using Moz’s Open Site Explorer, we found out that the press release with 149k shares has only 1 backlink with a Domain Authority well below quality (19 on a scale of 100).

Investigating further, the backlink itself has 4 spam flags.

As we end, if you’re still choosing to go with PR syndicated distribution, I ask you to ask yourself:

If the highest shared press release in existence has only one backlink, which is spammy, what real value are you getting out of your syndicated press release distributions?

We still offer press release writing from expert journalists! A PR in and of itself, as Grice said, holds much value (as long as you’re using something a little better quality than the syndicated online network.) As of October 31, we no longer offer distribution only. Get your written press release here.

Comments welcome! Tell us your thoughts below.

Download your Free copy of The Wicked Witch of Online Syndication is Dead: Why We’re No Longer Offering Syndicated Press Release Distribution