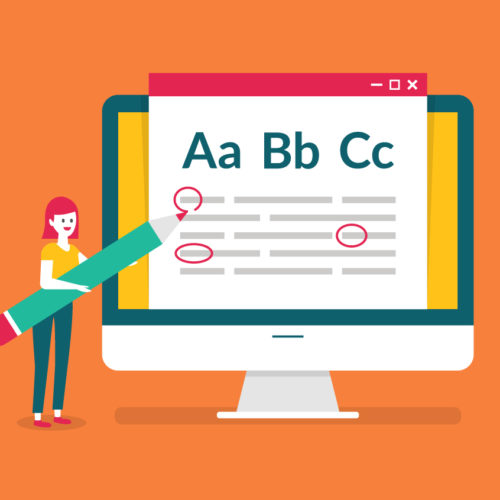 Capitalization Rules for Online Writers: How to Write and Capitalize for the Web

Your knowledge of internet grammar is important to the perceived quality of your online content.
When you know your stuff, you portray yourself as sharp, smart, savvy, and updated. Readers trust you. Haters (if you have any) can’t point out your flaws.
But becoming an expert in capitalization isn’t poring over a heavy grammar book and memorizing rules.
Internet grammar is far different than the grammar we learned in school and college.
And these grammar rules are fluid at best, and constantly in flux.
There’s a fine line between appearing uneducated (foregoing solid grammar rules) and outdated or irrelevant (being the only person in your industry stubbornly sticking to obsolete rules, or that essay style instead of online content writing).
So, how do you avoid common pitfalls in writing and capitalization for the web?
The best way is to refresh yourself on the basic capitalization rules for online writing. Do this often so you don’t get outdated.
Here are six to keep in mind.

Internet grammar is FAR different from the grammar we learned in school & college. There's a fine line between appearing uneducated and outdated or irrelevant. Learn these 6 capitalization rules via @JuliaEMcCoy and avoid both! 👩‍🏫 Click To Tweet 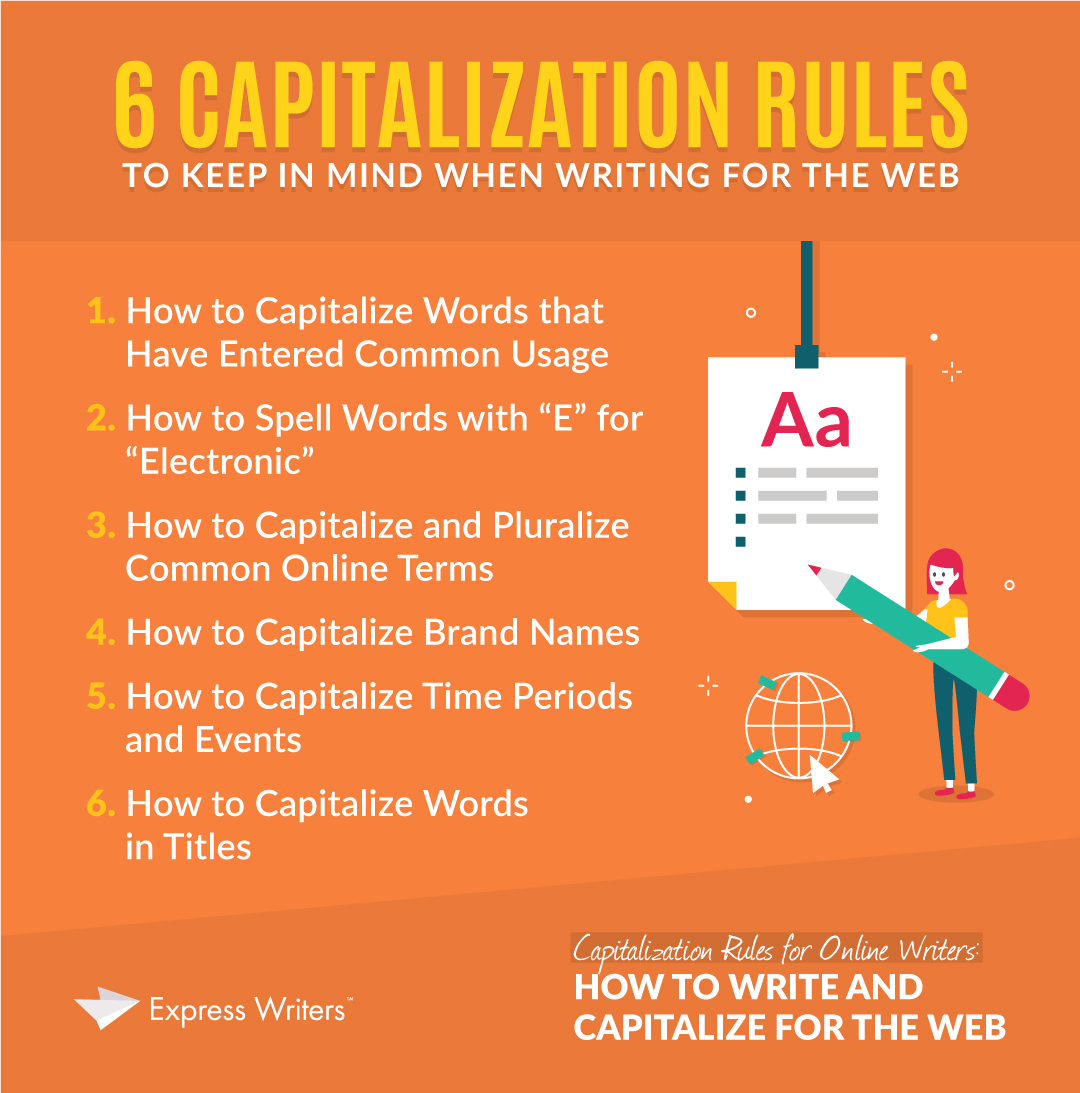 6 Capitalization Rules to Use When Writing for the Web

You don’t want your audience to see you as sloppy or uneducated because you don’t follow the capitalization rules sophisticated online writers use.
But also, you don’t want to appear as overly-conventional as your college professor was when he discussed the Oxford comma. 🤓
Keep these six simple rules in mind to avoid either extreme.

How to Capitalize Words that Have Entered Common Usage

Remember when the word scuba was first introduced to the English language?
Back then, it was SCUBA, short for Self-Contained Underwater Breathing Apparatus. A mouthful, I know!
But like a ton of new English words, SCUBA soon became generic and common. It was decapitalized and transformed into “scuba.”
Rule: Don’t capitalize words that have entered common usage.
Here are a couple more examples.
1. Internet
When it first appeared, the world “internet” was capitalized.
Computer Hope stresses that because it’s a proper noun, it should be written with a capital “I.”
However, experts disagree.
As the word internet made it into mainstream language, the number of savvy online writers using the decapitalized version grew.
Here’s a quote from Stephen Wilbers dating back all the way to 1995. 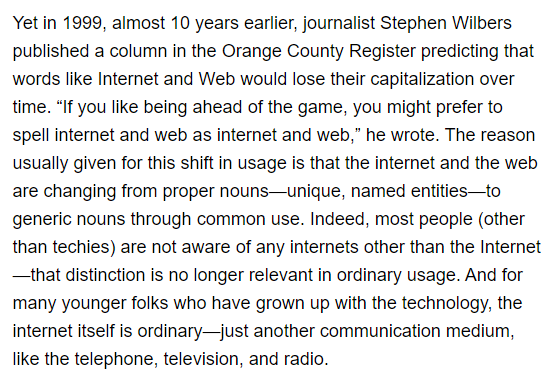 The use of “internet” wasn’t limited to bloggers and journalists. In 2016, AP Stylebook announced that it too would jump on the trend.

In 2017, they were joined by the Chicago Manual of Style.
So, while stricter grammar rules demand “internet” be capitalized, we can now safely write it in lowercase letters. 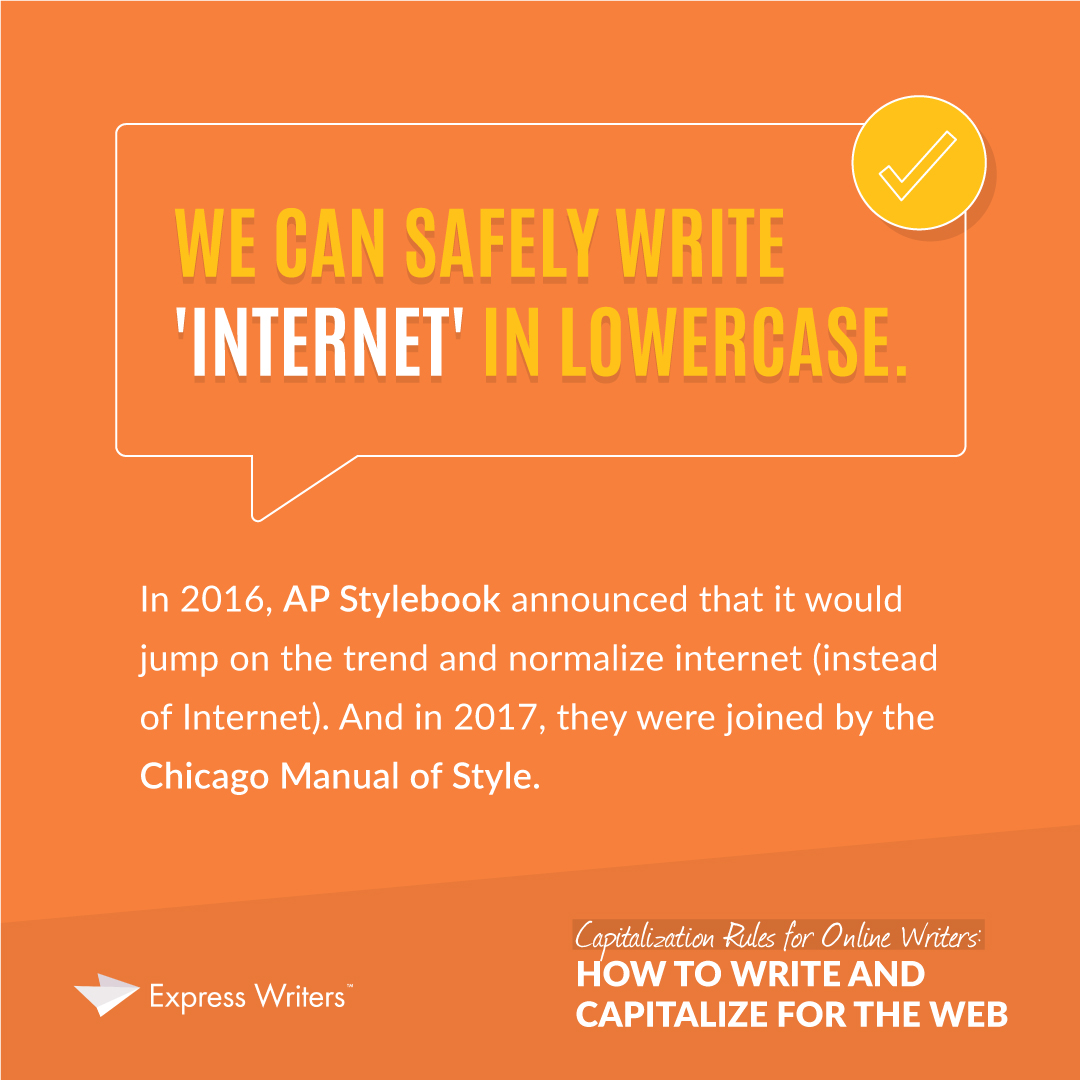 Yes, it's true - according to capitalization rules, you can safely write 'internet' in lowercase. 🎉🤓 (@APStylebook and @ChicagoManual approved ✔) Click To Tweet
2. Web
“Web” is a shortcut for “World Wide Web.” Because it’s a proper noun just like “Internet,” it first appeared in the English language with a capital “W.”
Later, it joined “internet” and became decapitalized.

How to Spell Words with “E” for “Electronic”

Here’s another tricky one: the “e” for electronic.
Is it e-mail or email?
Is it e-commerce or ecommerce?
According to grammar, two words joined together to form a compound word require a hyphen. Example: long-term.
However, trusted style guides now recommend removing the hyphen because of popular usage. The Chicago Manual of Style is one of these guides.
Also, look at Grammarly’s definition of closed compound words. 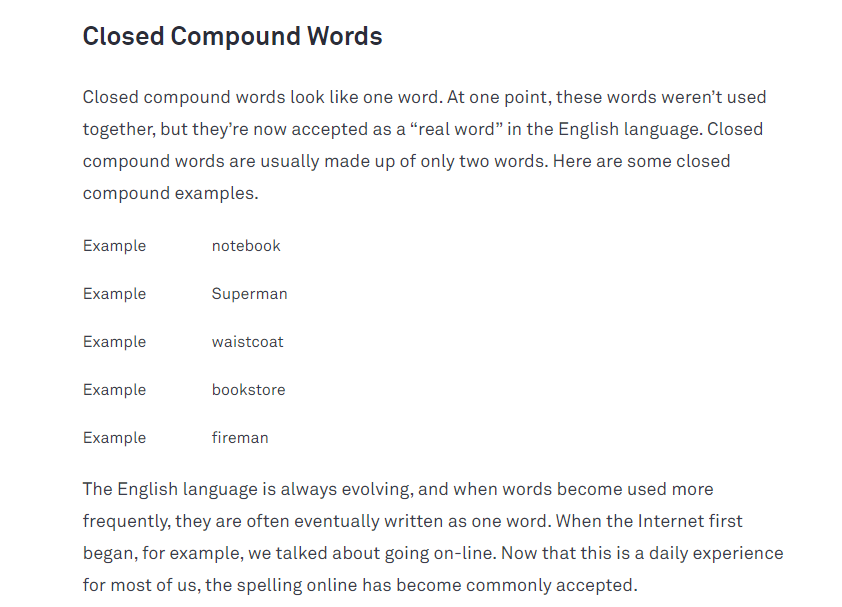 Does this mean you can never spell it “e-mail?”
Well, not exactly.
Grammarly also says that both e-mail and email are correct.
How do you choose which one to use?

Is it e-mail or email? 🤔 Is it e-commerce or ecommerce? Learn what you need to know so your online writing always fits your brand style and tone of voice 💯 Click To Tweet

Writing for the web is tough because you’re constantly bumping up against internet language you’re unsure how to capitalize.
For example, do you write it SERP or S.E.R.P?
How do you pluralize it? SERPS, SERPs, or S.E.R.P.s?
Is “keyword” capitalized?
1. SERP and SEO
These acronyms are HUGE if you’re a blogger in the content marketing field. Since you’ll use them a ton of times, it’s important to know how to write them early on.
So, do you spell it S.E.O. or SEO?
According to the AP Stylebook, you shouldn’t place periods in an acronym unless it’s a proper name.
So it’s U.S.A. and J.K. Rowling, but SEO, SERP, and PDF. 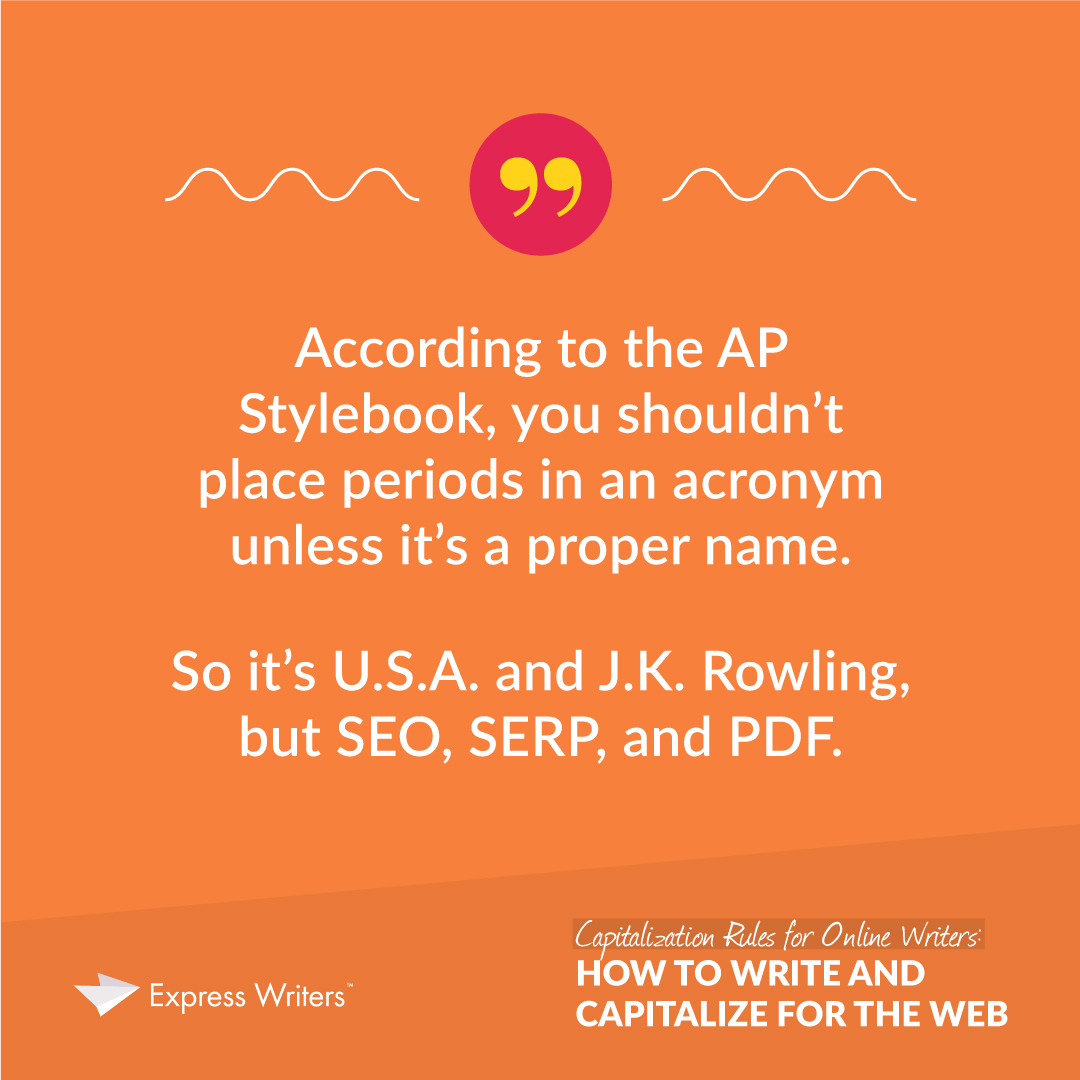 2. Rules on the Internet’s Common Nouns
Unlike “internet,” “blog” is a common noun. Words like “data,” “website,” and “keyword,” are also common nouns.
Always keep them in lowercase letters unless:

Good so far?
3. How to Pluralize Acronyms
Pluralizing an acronym can become awkward if you miss the rules.
For instance, is it SERPS? Or SERP’S? Maybe SERP’s is a better idea?
Take note of the rule: Add a lowercase “s” to pluralize an acronym.
So it’s SERPs, JPGs, and PDFs.
Use SERP’s and PDF’s to show possession. Example: All my PDF’s links are broken.
How about pluralizing an acronym ending in “s”?
Since SOSs is just confusing, use an apostrophe to write the plural form. SOS’s.
Rule: You can use an apostrophe to pluralize acronyms when it assists readability.
Writing for the web is confusing. ❓ Do you write it SERP or S.E.R.P? ❓ How do you pluralize it? SERPS, SERPs, or S.E.R.P.s? ❓ Is 'keyword' capitalized? Get all the answers 💡 Click To Tweet

How to Capitalize Brand Names

Imagine yourself deciding to mention your favorite brand in a blog post.
Do you just capitalize it normally, like any other proper noun?
Yes, if that’s how it’s copyrighted.
A great example is ours, Express Writers. It’s capitalized just like any proper noun would be. 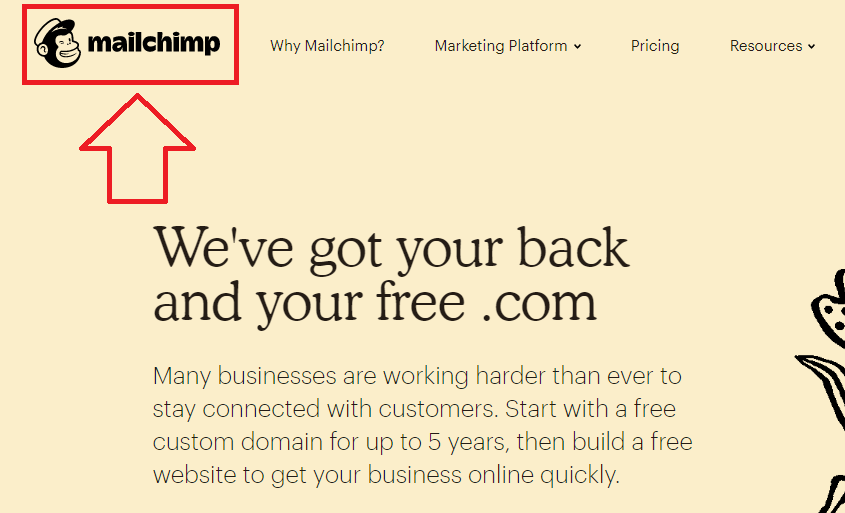 The logo spells it “mailchimp,” so do you use all lowercase letters when mentioning it in your writing?
Looking at the URL, you’ll also notice all the letters are lowercase: mailchimp.com.
But neither are correct for use in writing.
The secret is to go down to the bottom of the page. Beside the company’s copyright sign, you’ll see the correct capitalization of the brand.

“Mailchimp” is the right way to capitalize it, not “mailchimp” or MailChimp.”

How to Capitalize Words in Titles

Want to mention a beloved book in one of your blogs?
Here’s how to capitalize it properly.

Check out these examples:

The tricky thing about grammar is nothing is set in stone.
As William Strunk, Jr. says in his book, The Elements of Style, “Writers will often find themselves steering by stars that are disturbingly in motion.” 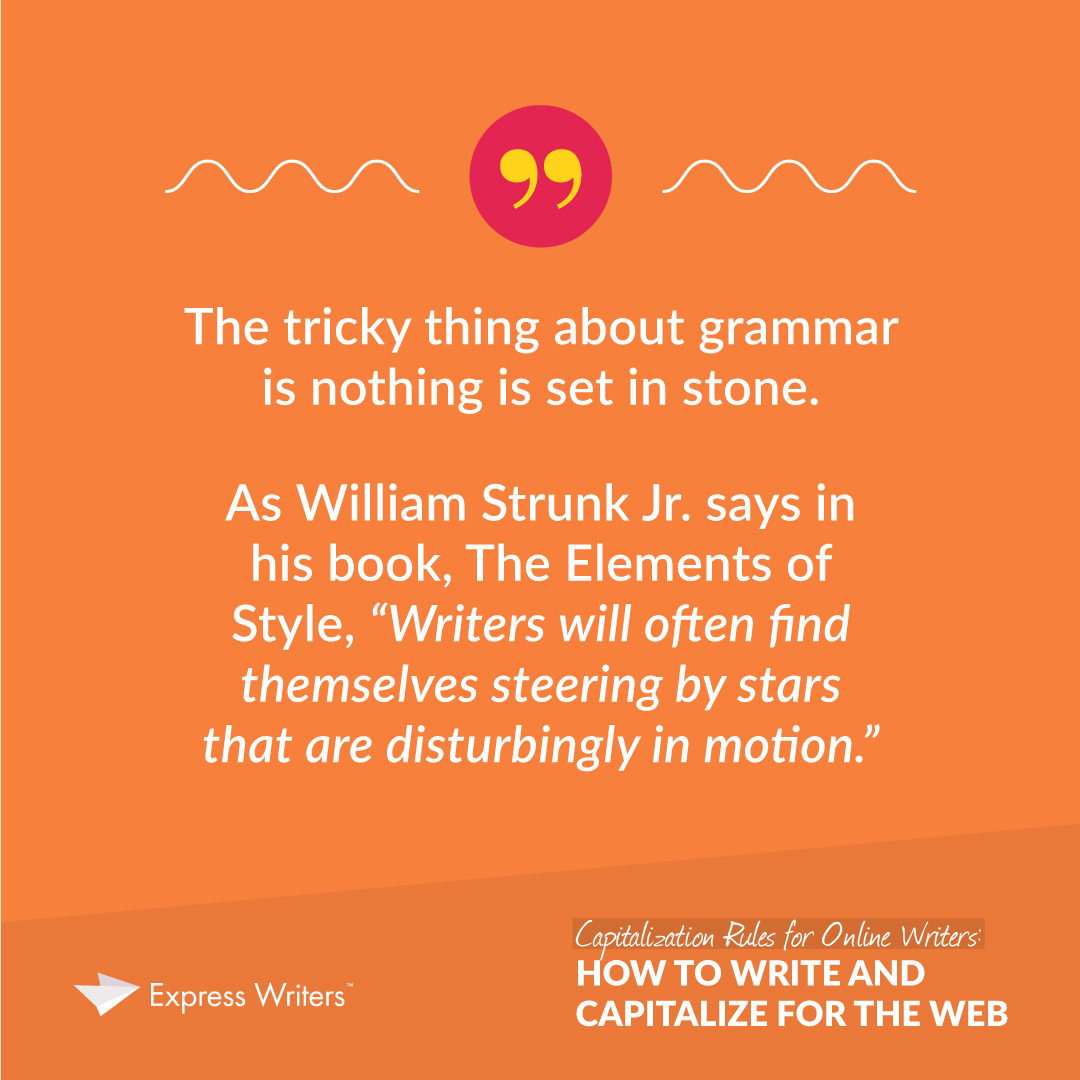 The good news is there are tried-and-true ways to avoid grammar gaffes and to publish perfect writing every single time.

It’s not easy to draw the line between the gauche and overly-scholarly. But the rules above (and the others you’ll find later) will keep you from falling into either extreme.
Need polished, profitable content for your brand? Visit our Content Shop to get the details.