Is The Dress Blue and Black or White and Gold? How It Went Viral | Express Writers

Is The Dress Blue and Black or White and Gold? How It Went Viral 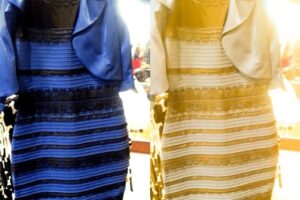 If you are less interested in the way in which your brain perceives colors and more determined to find out how a picture of a dress had the power to break the Internet and fuel one of the hottest debates of the year, chances are that you are also wondering why #TheDress made history this month.

The dress that managed to go viral online is a chameleonic product in its own right: some think it’s blue and black; others swear it’s actually white and gold (while more than a few debaters label it as an eye sore regardless of its color and end this discussion without any further ado).

The science behind this controversy provides a logical explanation for this weird phenomenon: the human brain has been trained to focus on the actual relationship created between colors, and not just the hues themselves. This hypothesis, introduced by Beau Lotto, a reputable professor of neuroscience from the University College London and cited by BBC in a recent article, allows us to reach the conclusion that people interpret the chromatics of the dress differently simply because they focus on different aspects; some pay more attention to the actual colors of the dress, while others “decode” the hues based on the background light or the shade of their very own computer monitor.

Defining the Color or Virality

Long story short, #TheDress debate made you laugh, made you raise an eyebrow or made you schedule an appointment with a local ophthalmologist. Science may be able to explain why people see this dress in different color combos, but how could one justify the virality of the picture that started and fueled the most ample social media conversation at an incredible speed, becoming the number one trending topic in the United States overnight?

How did this controversial (and in reality, awfully plain) dress manage to simultaneously gather more than 670,000 people on Buzzfeed, convince 900,000 visitors to take a poll and give no less than 10 million people at least one good reason to read the entire post? Here are a few plausible reasons why the blue and black/white and gold dress has succeeded in creating quite a stir worldwide.

As Long As It’s Viral, It Doesn’t Really Matter If It’s Black or White

Aside from giving us the impression that we may be colorblind, #TheDress debate has also inspired another moment of revelation: the one in which you realize that crafting viral content is not as difficult as people say it is.

Here are the main ingredients that you should combine to take your story to a whole new level: a fun, uncomplicated piece of information generating positive emotions, a little bit of controversy created around your story and a new perspective that will make your readers question everything they have ever read, heard or spoken.

When you craft content that encourages people to quarrel, take sides and share their (unsolicited) opinion via social networks you are automatically prepping yourself for success, while getting ready to step into the spotlight.

Download your Free copy of Is The Dress Blue and Black or White and Gold? How It Went Viral