false
You are here: Home / Content Marketing / Is The Amount of Content Plagiarism on the Web Embarrassing?

Some say he was drawing on intellectual tradition.

Some say he was a plagiarist.

Others just call him Thomas Jefferson.

Hang on a minute. Did we just call Jefferson a plagiarist? Maybe a little. There was a man named John Locke, and it’s said that Jefferson copied directly from it for the Declaration of Independence. (Check out the reasoning behind this claim here).

This meme sums up how most of us would probably feel regarding this claim: 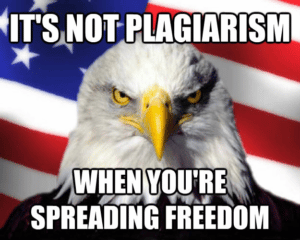 Does plagiarism go back that far? Has it gotten worse in the age of all things digital? 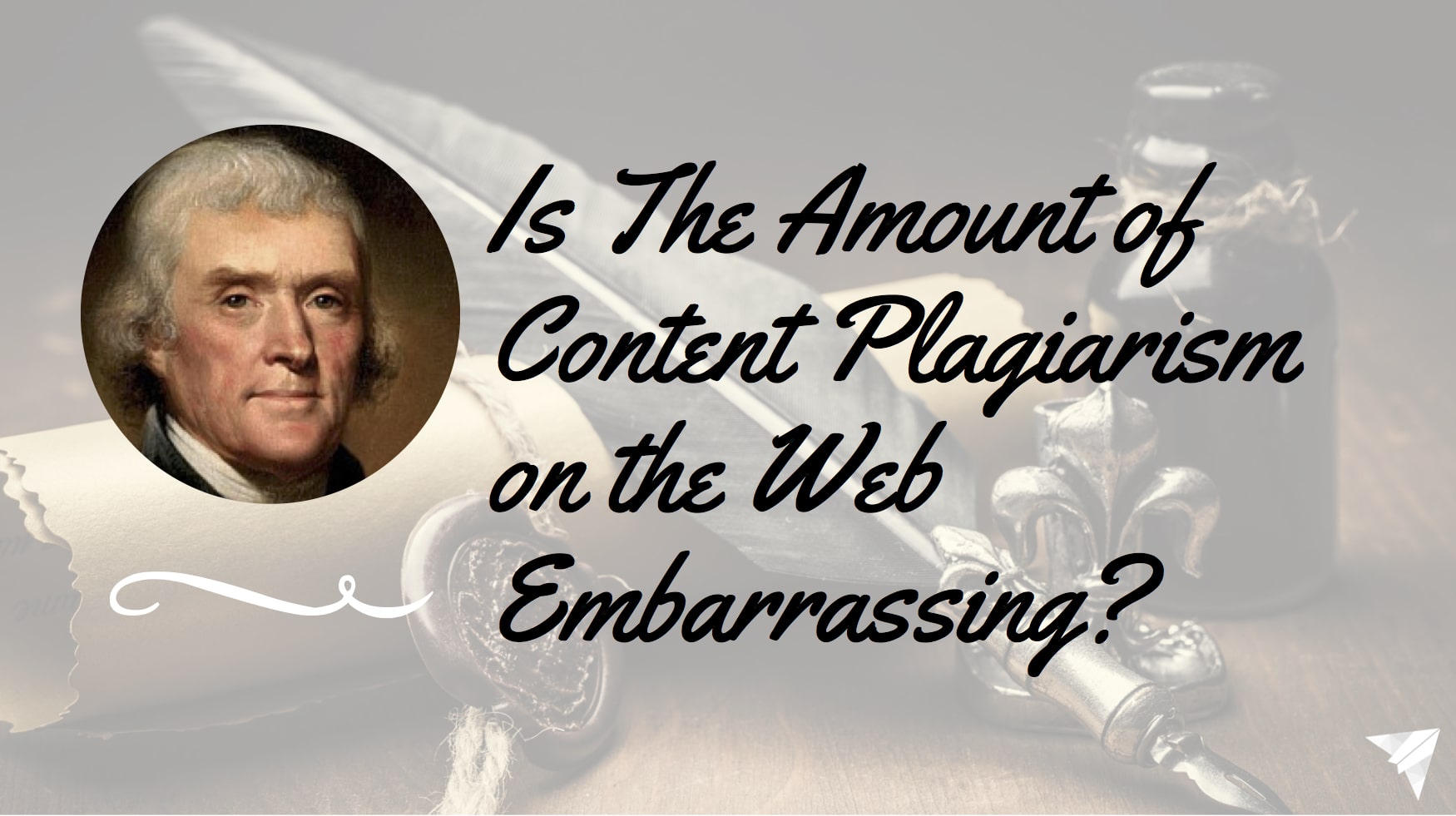 A poet in 80 A.D., Martial, wrote some poetry aimed at a plagiarist that was copying his work. The original word he used, a Latin word plagiarus, described his unnamed thief – and was the formulation of today’s word, plagiarism. Interestingly enough, the word originally meant to kidnap. Yikes, Martial was pretty angry at the copier of his poetry – but hey, I totally get his anger.

But before and after Martial’s age, it was common practice to copy off other people, even in writing complete history books, with little repercussions. It is said that Benjamin Franklin plagiarized entire volumes. (Whoa, dude!) Jefferson reportedly stole from John Locke to create the Declaration of Independence.

Shakespeare even swiped entire plot scenarios from others. He took entire whole phrases from Plutarch and copied them in his play Antony and Cleopatra. But, some have stolen from Shakespeare, too (the famous early author, T.S. Eliot).

So as you can see, it’s actually “olde practice” to copy off others. But not all olde practices are good practices, especially this one.

In the 18th century, originality really started becoming an idea, or a thing. In 1755 the word plagiary was added to Samuel Johnson’s dictionary, defining a plagiarist as a thief in literature.

More recently, there was a plagiarism fiasco that went on at the widely Internet-famous BuzzFeed. It was related to some crappy content going out (never put out crappy content, folks).

Do you remember the controversy of that Washington Post live chat where Gene Weingarten held forth on that Benny Johnson plagiarism scandal that happened at Buzzfeed?

To jog your memory: Johnson took full lines from sources that ranged from Wikipedia to Yahoo! Answers. That plagiarized content was then used for some rather bottom-of-the-barrel posts.

What Weingarten had to say about this was “…to be guilty of theft one must steal something of value.” You can find the full, hilarious opinion here.

Is It Merely About Repackaging?

Let me put this to you: one man’s treasure is another man’s trash.

Of course, using direct quotes without the right citations or marks is indefensible. But is there anything inherently evil about repackaging another person’s ideas in a way that resonates a little more loudly with audiences? I mean, isn’t this a variation of the entire model used by some of the biggest Internet platforms, from Pinterest to Facebook?

Attribution. This is where the problem lies.

The bad thing about the Internet is that it’s just too easy to steal stuff.

The good thing about the Internet is that it’s just so easy to link to the primary source.

This was probably the biggest crime in Benny Johnson’s piece – there was a lack of quotation marks in some of the direct quotes, but had he included a link to the source, it would’ve been more acceptable.

The entire practice of linking is a service for both terrible and good content. It gives the original writer their credit or alerts readers to a questionable source when content isn’t up to par. 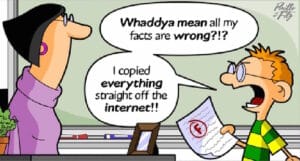 Did you know there’s an unwritten rule in advertising – you can steal from a book, movie or anything else so long as you don’t steal from another ad.

Finding that smidgeon of reality that is appropriate to your client and their product is basically advertising’s holy grail.

But hasn’t the Internet gone and changed what we perceive to be wholly original to a more widespread, collaborative type of originality?

While the World Wide Web had transformed our view of “originality,” it’s also made it a lot easier to plagiarize and even detect plagiarism.

So you can go and, um, ‘borrow’ ideas from ads. Or you can use the Internet to check you’re not unintentionally ripping someone else’s ideas off.

Does That Make Every One Of Us A Copy Plagiarist?

Doesn’t that seem like a level playing field then?

Or have we all become plagiarists?

Or, gasp, have we always been?

A lot of teachers view plagiarism as a clear cut issue. They bring it up when you’re starting out a research paper, discuss it during, maybe, one period, and never come back to it, unless a student is caught copying.

Teachers warn us not to copy or there will be consequences. They tell us to present detailed citation guides; they teach us how to quote, summarize and paraphrase. Then the onus is on us to use these techniques properly.

But It’s All Right There – Online – Staring At Me

In an age when students can gravitate to online sources for their research, and when copious amounts of both questionable and reputable information is available – many people have come to regard the Internet as a culprit in plagiarism. Some teachers will even go so far as to forbid their students from doing research online, mistakenly believing that if they use hard-copy sources only, the problem will go away.

Can We Completely Blame The Internet?

Many a commentator blames the easy accessibility of the plethora of information online as the main cause of student plagiarism.

Sue Carter Simmons, a researcher, dispelled this myth, though. She has shown that we have been plagiarizing since the 19th century. In fact, a 1986 survey of high school students – a time long before the Internet was a cultural phenomenon, confirmed this finding: as many as 80 percent of high school students surveyed admitted to copying some to most of their school reports.

Does this not render the Internet, at most, a complication in a long-standing dynamic?

Of course, there are some features of online research that could affect how plagiarism tends to creep into writing, and it’s no wonder educators are up in arms by the potential the Internet has to encourage unlawful copying.

Since it has become so easy to appropriate text via cutting and pasting, it’s just so easy for even the most well-intentioned of students to overlook boundaries between what they have produced themselves and what they found on their screen.

The same goes for writers, bloggers, journalists – we all leap ahead, creatively brainstorming and checking out a plethora of online sources. We may forget – or neglect – to pause and insert that citations or quotation marks. Perhaps we intend to come back later and do that. But “later” just slipped away. Did this happen to Benny Johnson?

So What About That World Wide Web?

Is the amount of plagiarism on the web really embarrassing? Or is it okay to repack, rephrase and re-cite so long as the quotation marks are there, the hyperlinks are inserted and the right credit is given?

And what if a writer has merely enhanced, updated and improved another’s piece to not just speak to an audience, but shout it to them from the rooftops?

Hey, don’t quote us, but we’d say there’s a debate in here somewhere!

What do you think? Let us know!

If you’re looking for unique, original and creative copy, check out our Content Shop. We promise we’re better at being original than Thomas Jefferson.