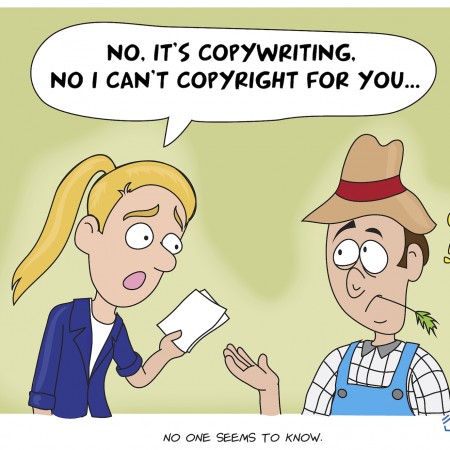 Copywriting vs. copyright.
Ah.
Copywriting is that wonderful trade where everyone – especially the further you live from a tech minded city – thinks you’re someone who legally protects songs. (Aka, copyright-er.)
It’s a common misconception, and one that the online copywriter has to bear often. But no, we can’t digitally protect the content of your newest album. We can write, though.
I’ve written up a little rant on the subject below. Enjoy. As well as the following nine truly cringe-worthy copywriting fails.
I’d love to hear what you’ve seen (or heard) in the comments below! 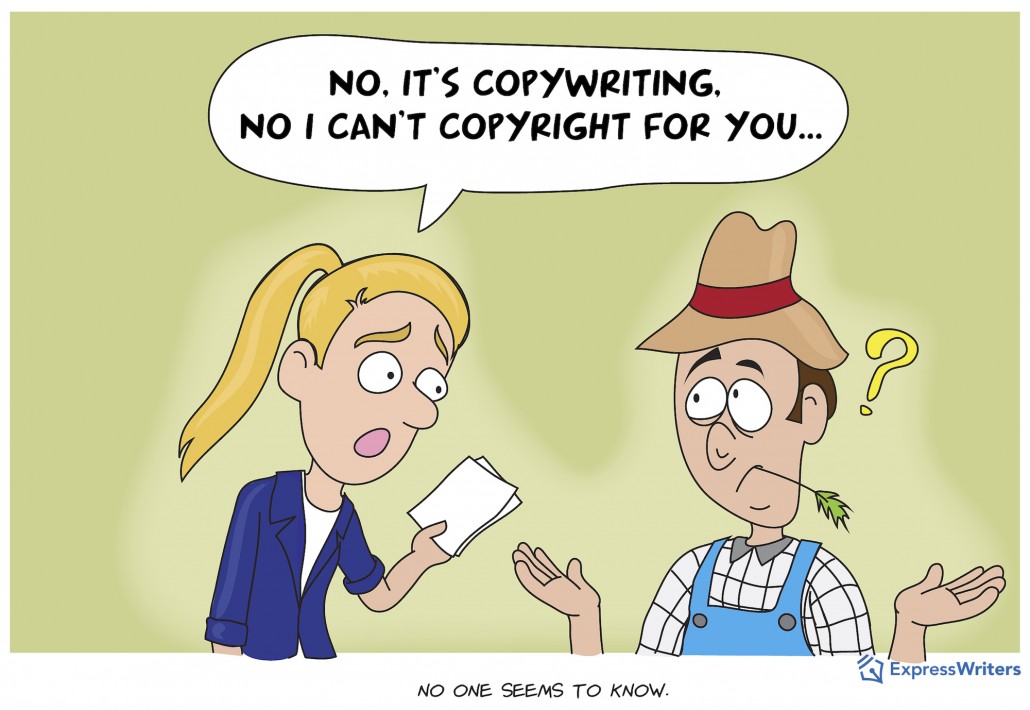 9 Killers of Copywriting: Copywriting vs. Copyright, The Anus Burger & More

Feel free to cue up the Benny Hill theme music as you read about these ten major copywriting fails.

1. Copywriting vs. copyright, the confusion caused by people everywhere – STILL.

As someone who’s been a professional copywriter for just over half a decade as of this exact date – and it does feel longer than that – one thing that irks me the most is when people say…
Oh, you do copy righting? Can you protect my buddy’s song he just wrote for infringement?
I was asked this by a cashier at a grocery store in Texas when I told him what I did.
No, people. It’s writing. With a pen. I write copy. Letters. Words. Things on a page. Online. No, it’s not coding. More like blogging.
Sigh…
Can we stop the confusion already?

At some point in time, you have probably seen a post or two about horrible tattoo mistakes. And as we all know, tattoos are permanent.
Do you know what the marketing equivalent of a bad tattoo is? Lands’ End. Why is there an apostrophe at the end of lands instead of before the s? There have been a lot of speculation and wild theories, but Lands’ End set the record straight on their blog: it was a mistake.
A typo popped up in their first printed piece, but they could not yet afford to reprint it and correct it. Therefore, it was immortalized in ink that they could never get rid of.
Now, to be fully fair to Lands’ End, they owned up to their marketing ‘tattoo’ fail and learned to live with it – because they are all about selling to humans, and humans make mistakes. Which is great for them.
But wouldn’t it have been better if they just put that apostrophe in the right place to begin with?

3. Miller Genuine Draft and the ABC’s of spelling.

Spelling can be hard. Even when you there is a rule, like i before e, there is often also an exception, such as after c. However, that’s what spell check is for (though make sure you see number 4.) Always use it – even if you have only one or two words for your copy.
Miller had an ad campaign that clearly did not get this message. That’s why we all know their Genuine Draft is a tasty contraditcion (as opposed to contradiction if you aren’t sure what I am pointing out here).
Talk about a big mistake – all they did was invert two letters – not a big deal on its own – but then they blew up that spelling mistake and put it on a billboard for everybody to see.

4. A special note on homophones from a gas company.

Homophones are words that sound alike but are pronounced differently. Think weight vs. wait, know vs. no, read vs. red, etc. Or, think duel vs. dual – the former is a fight between gentlemen usually began by slapping your opponent in the face with a white glove; the latter means two, double, etc.
Yet, a gas company had a marquee that read ‘Treat Your Vehicle to Duel Exhaust.’ Either that was an error, or there was a really strange fight a brewing.
This is especially a common problem when you think of their, they’re, and there or other very common homophones. So when you right make sure you do it write – except, to quote Willy Wonka, “Strike that. Reverse it.” – when you write make sure you do it right. See how easy it is to slip up, though?

While it is smart to use spellcheck, relying on it too heavily can cause some very embarrassing mistakes. For example, the 15 best things about public schools are probably a completely different list of things than the 25 best things about pubic schools. However, spellcheck doesn’t always realize this.
Both Hardees and McDonalds learned this lesson when they started offering the anus burger, which was not as popular as their Angus burger and for obvious reasons. 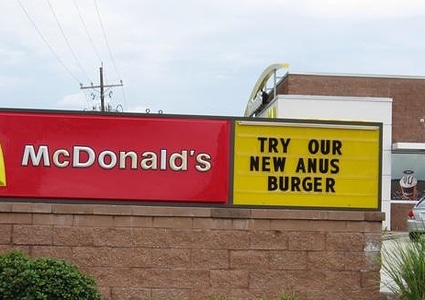 Horror of horrors.
Hello, welcome to McDonalds. Would you like our butt burger special? With extra anus sauce?
As someone who actually used to work at McDonalds to make my income in nursing school, I can appreciate how that would go.

6. McDonalds Again? Marketing is all about the placement.

Where you place your copy is often just as important as what you put on your copy. For example, you probably wouldn’t want to put your billboard for a daycare up in a senior community – most of the seniors living there probably don’t have children in the daycare age range, after all.
Which is what makes this McDonalds billboard so bad – nobody wants to see that big burger displayed right next to the sign for urgent care. When we supersize it, we like to bury our head in the sand and pretend that we don’t realize the unhealthiness of our actions.

While if you put any type of mistaken information in your copy it could come back to haunt you, this is especially true if you mess up your own information.
Take Macy’s, for example. In 2013, they sent out a mailer to people across the country that had a $1500 necklace on sale for $47. People were very interested in this killer deal, and Macy’s sold a lot of these necklaces.
Why would any store mark down something by $1453 or by almost 97%? It turned out that in this case, it was because of a mistake. The ad was supposed to read $497, not $47. This one small typo made a ridiculous amount of difference.
This should show you just why fact-checking is an important part of copywriting.

Many people go to Vegas for a quickie marriage. Or maybe they don’t go there for a quickie marriage, but find themselves in one when they arrive. Either way, they either have a bride already picked out when they arrive or they accidentally find one after they have been drinking too much. However, it is probably rare to find someone who went to Vegas in order to look for a cheap wife.
Yet, for some reason, a Vegas Holiday Inn thought there was a market for wives, which must be why they offered a “Free Wife” for staying there. On the other hand, maybe they meant to say Free Wi-Fi.
See? A small mistake can lead to a whole lot of confusion.

9. Think about how you word things before they balloon up on you.

Sometimes, you can technically write everything out correctly and still come off looking foolish. It’s not only spelling words correctly, it’s about wording them correctly as well. For example, take this advertisement for a balloon service.
Hopefully what they mean to say in this copy is that if the customer chooses to blow a balloon up on his or her own, it will cost 25 cents. If, on the other hand, they choose to have the store do it, it will cost 75 cents. It reads rather differently, though.
It’s 25 cents if the customer blows up, and it is 75 cents if they blow up. I’ve got to tell you: if I blow up in a store, I hope my family gets a lot more than 25 cents. On the other hand, were I to blow up the store, I would be fine with only being charged 75 cents.

What everything boils down to here is this: please, please, please proofread. And then have someone else proofread.
You may know the difference between know and no, but that doesn’t mean you can’t accidentally write no when you mean know as you are concentrating more on how best to sell a product than on homophones. You know how to count to five, but that does not mean you will not ever start out having five points, realize one doesn’t work, remove it, and forget to change the header.
These are the types of mistakes that can happen to anybody, even the biggest, most talented copywriting grammar nerds out there. The difference, though, between the average, mistake-prone marketer and the seemingly error-free marketer is simple: one knows how to proofread and never skips this important step.
After all, nobody wants to buy kids learning software when the ad says, “So fun, they won’t even know their learning.” Just ask Creative Kids Software.