Marketing Lessons From Taylor Swift: What We Can Learn From The Pop Star-Turned Media Mogul 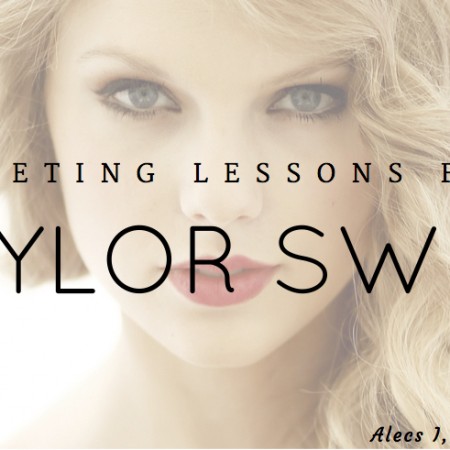 When you think of Taylor Swift, it’s likely that the image of a marketing guru doesn’t come to mind.
As it turns out, though, Taylor Swift is more than just a pretty voice and an Instagram feed full of kittens: this 25 year old pop-star is also a winning force in the marketing world. 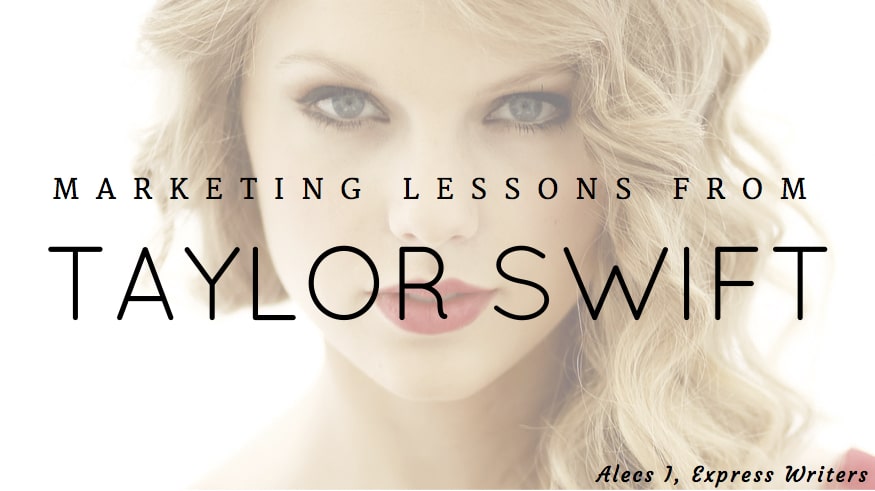 She’s risen to fame at a young age. How did it all happen?

Taylor Swift is probably best known for her bevy of Number 1 hits. Throughout the duration of her career, the blonde bombshell has seen the top of the Billboard Charts four times. “Bad Blood”, her most recent chart-topping hit and the third from her ultra-popular 1989 album, took less than two weeks to scale the mountain of new music, which begs the question: what’s her secret? Is it just great song writing and a direct, T-Swift-only line into the hearts of millions of music-lovers worldwide or is it something else?
The answer, as it turns out, is that Miss Swift is just really, really good at marketing. And no, she didn’t take marketing lessons..
Part of her marketing prowess comes down to knowing exactly who to partner with at exactly the right time. Although “Bad Blood” has been bumping around since the release of 1989 in October of 2014, Swift managed to propel it to the top of the charts recently by re-mixing it with Kendrick Lamar, who happens to be one of the hottest names in today’s hip-hop scene.
By doing this, Swift utilized one of the oldest and most effective marketing games in the book: combining forces for better results. There is something distinctly omni-channel-esque about Swift’s decision to pair with Lamar and it is obvious that by joining forces with the hip-hop legend, she made an amazingly intelligent marketing move that allowed her to tap into a different stream of listeners.
While Kendrick Lamar’s listeners may not have chosen to purchase a Taylor Swift album before the re-mix of “Bad Blood” dropped, it is likely that they will now, which allows Swift to broaden her already massive fan base.
Additionally, the strategic addition of Lamar means that Taylor’s typically pop/country songs now stand a very real chance of being played on Hip-Hop radio and streaming stations, which provides a new and exciting platform and serves to further her apparent plan for total global domination.

One of the foremost things that have garnered Taylor Swift global affection is the fact that she’s always seemed utterly reachable. All you need to do to produce evidence of this is scan the YouTube comments that accompany her “Shake it Off” or “We Are Never Ever Getting Back Together” videos for ample fan gushing and statements of identification.
In the past, Swift’s funny, sweet music videos have given her a mainline catheter into the hearts of many but, now that she has reached epic levels of popularity, she’s begun to change it up.
Unlike her previous videos, “Bad Blood” takes its plot line from a Bond-esque action film, complete with plenty roundhouse kicks, high-tech scenes and pop-culture references to Kill Bill and LeeLoo’s famous strappy costume from The Fifth Element.
In addition the fact that “Bad Blood” is visually shocking and a complete foil to anything Swift has done before, the video is chock-full of powerful female names. Everyone from Paramore’s Hayley Williams to supermodel Cindy Crawford and actress Jessica Alba are featured in the video, which means that it will show up across their respective fan bases, as well, allowing Swift to expand her already massive reach.
More effective than the inclusion of big names, however, is the way that Swift and her marketing team chose to tease viewers during the lead-up to the video’s release. For the weeks preceding its launch, each of the famous faces featured in the “Bad Blood” video released a vintage-looking shot of her respective costume and character on Instagram, giving audiences an exclusive sneak peek and the added fun of a distinctly movie-poster feel.
Every time a new image dropped, the media went wild and Swift’s social media follower count gained a few zeros. Although 1989 was already a chart-topping album (it never left the top ten) Swift timed her “Bad Blood” launch with the moment when the album began to lose some of its death-grip on the industry. In order to drum up more enthusiasm for the video’s release, Swift seized one of the biggest events in the industry: The Billboard Music Awards.

One Release to Rule Them All

This year’s Billboard Music Awards opened with a clip from “Bad Blood” and the rest was history. An estimated 11.1 million people watched this year’s Billboard Music Awards and every single one of them bore witness to Swift’s newest brain-child. It doesn’t hurt that Swift went on to win eight trophies that night, furthering her reputation as a top dog in the music industry.
The fact that Swift and her team chose the Billboard Music Awards to launch “Bad Blood” was no accident. By choosing such an important, media-riddled and highly-televised event, Swift and her team ensured that the video would not only set the stage for the awards, thus creating a sort of aura that would hang over the event all night, but also that it would be highly televised, tweeted about and reported on.
In the end, it wasn’t so much the unique genius of “Bad Blood” that rocketed the track to the top of the charts as it was the dedicated, calculated and painstakingly specific utilization of advanced marketing efforts combined with brilliant launch times and media release tactics.

How Swift Does Classical Marketing With a New Twist

Swift’s launch of 1989 is akin to a master class in marketing and, if she keeps going, she’s going to usurp MBAs everywhere. Even before Kendrick Lamar entered the scene, Swift was enjoying partnerships with the likes of Diet Coke, with whom she produced an adorable commercial resplendent with kittens and plenty of whimsy.
As if the kittens weren’t enough, the commercial is set to a backdrop of Swift’s own music and, at the end, Taylor herself puts for the call to action for fans to buy her new album, as if fans needed any instruction, at that point. Taylor also partnered with Target in an exclusive-release deal that provided Target customers with a “Deluxe Edition” album, which offers three bonus tracks and exclusive content.

It’s one thing to hear about your favorite musician through a consistent filter of reporters, news outlets and tabloids and entirely another to hear it right from the horse’s (or, in this case, Taylor’s) mouth.
In the months leading up to her 1989 launch, Swift created a cross between a podcast and a talk show and live-streamed it to her audience. During each short episode of the show, Swift discussed her influences, her music, the upcoming album and her favorite things. Needless to say, fans went wild.
To take her promotions a step further and heighten her image as an approachable, friendly star, Swift did Skype Q & A’s with fans and conducted “secret sessions” during which she invited fans to her home and provided them with home-baked cookies and an ultra-exclusive screening of her new album.

Swift is no slouch when it comes to multi-channel marketing and she uses each major media outlet to her distinct advantage. For massive launches, announcements and promotions, she uses mass media in the form of television ads while she chooses to use the Internet and various PR approaches for product promotion. Swift also uses her Instagram account to treat fans to well-timed sneak peaks of new song lyrics. No matter where, or how, her fans show up in the digital or social media world, it’s clear that Tay Tay is there to meet them.

What We Can Learn From Swift

It’s always been clear that Taylor Swift is great at what she does, but when you take the time to break down her success in the marketing world into tangible marketing lessons for us all, it’s a little mind-boggling. Since the release of her self-titled album in 2006, Swift has won seven Grammy Awards, 16 American Music Awards, 22 Billboard Music Awards (to name a few) and has been honored by the Songwriters Hall of Fame. Each of her albums has sold a bare minimum of four million copies and she’s a regular at the top of the Billboard charts.
While a good portion of all that success is talent, we know that talent alone doesn’t make a successful artist. It’s clear that, in addition to her considerable musical talent, Taylor Swift also possesses considerable marketing talent that has served to make her one of the most powerful forces in the music business, even going so far as to influence tech-giant Apple’s behavior with a single tweet.
Let the record show: Taylor Swift knows a thing or two about successful marketing.