false
You are here: Home / Social Media / Here’s One Celebrity Trend You Don’t Want to be Following: Buying Social Med...

If you’ve ever dipped a toe into the world of blogging, you’re familiar with the “follower dilemma.”

That said, it makes sense to have as many followers as possible, right?

It may even make sense to get those followers through whatever means necessary, right?

Come to think of it, purchasing followers isn’t a terrible idea, right?

Although many of the world’s biggest celebrities beef up their social media accounts by buying followers, it’s not a trend you should follow. Here’s why:

Although it may be surprising to some, buying social media followers is a hot business in Hollywood. Each year, companies that manufacture fake profiles and like producing “click farms” rake in hundreds of millions of dollars. 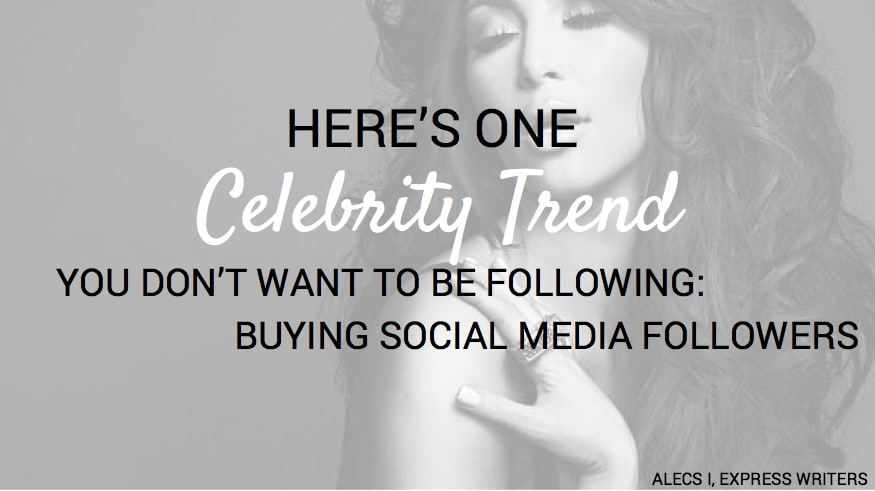 One of the many problems with these so-called like farms (aside from their blatantly fraudulent nature) is the fact that, although the companies themselves are raking in the cash, the workers behind the hundreds of thousands of “likes” being produced on a daily basis are generally low-paid individuals from Dhaka, Bangladesh. These workers often make as little as $1 per 1,000 clicks and are subject to sweatshop-like working conditions.

The click-farm problem has gotten so bad, in fact, that Facebook recently stated that up to 14.1 million of its more than 1 billion total users are fraudulent accounts built by overseas click-farms. Given these numbers, it’s easy to see how celebrity social media accounts are able to utilize purchased social media followers to quickly inflate their follower base and boost the appearance of popularity.

The Problem With Fake Followers

Although it might be perfectly fine for an uber-celebrity like Kim Kardashian to have 40 million Instagram followers, this doesn’t fly for Every Man, nor should it. While the temptation to purchase followers can be considerable, bloggers, businesses and individuals are best off giving the fake follower scene a wide berth.

Fake Followers Aren’t Going to Beef Up Your Business

In addition to being exploitative to low-paid, overseas workers, there are plenty of completely valid reasons you shouldn’t buy fake followers for your business. First and foremost: fake followers don’t generally increase business. Although purchasing social media likes is touted as a way to increase conversions, it may actually have the opposite effect. Although purchased fans result in a spike in overall “likes” or follows, they don’t ultimately interact with your page the way a real human does. In other words, a fake profile that has been built solely for the purpose of providing fraudulent “likes” won’t also provide high-quality page links, mentions, page views or conversions. Since these are the things a web page ultimately needs to succeed, it is obvious that purchasing social media followers won’t do anything besides boost your subscriber numbers.

Additionally, purchasing social media followers will ultimately dilute the experience of your real fans. By drowning your page in phony likes and spammy comments, it is distinctly possible that the presence of fake followers will intimidate or completely overshadow your authentic fans.

Because of the obvious presence of fake profiles hovering around your page, real people that may have otherwise interacted with you or your product will be less likely to comment, convert or join in than they may have been if more of your followers were authentic.

While celebrities don’t need to spend much time or brainpower analyzing their engagement rates, normal businesses and bloggers do and the presence of fake followers will make this process incredibly difficult.

Additionally, fake followers make it difficult for you to track where your high-quality traffic is coming from, who is engaging with your brand and who is not and how you can best attract more users. Faulty marketing data makes it tough to have a successful business and, in many cases, purchased followers are to blame.

Fake Followers Lead to Disappointment and Huge Fluctuations in Numbers

Individuals who purchase fake followers in hopes of beefing up their social media numbers and lending a false sense of authority, permanence and popularity to their business or web page are likely to be disappointed when their thousands of fake followers suddenly disappear. Dozens of companies across the web have cracked down on fake followers. For example, in a move known as the “Instagram Rapture,” Instagram wiped millions of fake accounts from its platform, causing Justin Bieber 3.5 million followers while rapper Tyga and famous-for-being-famous celebrity Kim Kardashian both lost upwards of 1 million followers. Take a hint from the celeb world: when it comes to building popularity, do it the honest way in order to avoid social-media based follower cleansing.

How to Purge Fake Followers

Is there a company you admire that seems to have tens of thousands of followers? Have you been wracking your brain trying to figure out what they’re doing that you are not? They may well be buying followers and, what’s more, it will be easy for you to find out. “But how?” you ask. As it turns out, there are many ways to spot fakes.

If you’re a Twitter user, you can utilize an app like “Fake Follower Check” to generate an overview of follower activity and fake profile information for any page on the web. To follow up, use an app like Twitter Counter to view the page’s growth progression rate. When using Twitter Counter, watch out for sudden, sharp spikes or drops in subscriber numbers that would indicate the presence of click-farms.

If you’re scanning a Facebook page, you’ll have to dig for fake profiles by looking into your page’s overall interaction patterns, as there is no app to check for suspicious activity. The tell-tale sign of fake followers is a page that has a huge spike in overall “likes” without co-occurring interaction on posts and content. Facebook also allows users to run Graph Search in order to determine where a business’s fans are coming from. If 60% of the page’s clicks are borne from Bangladesh, it seems like a pretty decent possibility that they’ve bought themselves some love.

Instagram, like Facebook, doesn’t offer a fake-checker app but it’s easy to spot falsies. If you click on a page’s followers and are confronted with a barrage of obviously fake profiles and names or profiles that don’t feature a profile picture, it’s safe to assume that many of the user’s fans are fake. Instagram profiles that only feature several pictures but have 30 thousand followers, nonetheless, are also often guilty of purchasing followers.

When it comes to the issue of purchasing fake social media followers, all reputable sources say the same thing: don’t do it. In addition to being an exploitative practice that takes advantages of vulnerable workers overseas, choosing to buy followers can ultimately do more harm than good to your page. Additionally, the presence of fake followers on any social media page creates an environment that is alienating and even harmful for authentic fans. Finally, fake followers won’t actually help your business by providing high-quality links, page mentions or conversions, which is truly the final nail in the coffin.

Although the allure of fake followers can be strong, it is clear that the negatives of purchasing social media fans far outweigh the positives. The practice of buying social media fans only muddies the waters for honest businesses and makes everything from marketing research to garnering conversions infinitely more difficult.

When it comes to building popularity, authority and a strong fan base, you’re best-served sticking to the old standbys. By creating quality content, interacting with followers, doing ample marketing research and providing your fans with great stuff, you can build a fan base made up of real people and devoid of all the pitfalls of fake social media followers.

Because, hey, who needs to live up to Kim Kardashian’s social media standards anyway?

How To Make Sure Your Brand Is Publishing High Quality Content (Infographic...