false
You are here: Home / barnes and noble

The publishing industry, as we know it, is radically different from what it was 10 or even 5 years ago.

More tumultuousness arrived back in June of 2019 when Barnes & Noble, the U.S.’s largest bookstore chain, was sold to a hedge fund (Elliott Management).

The sale comes after a slew of top-level management troubles, fierce competition from online booksellers like Amazon, and the closure of more than 150 stores in the last 10 years.

In the New York Times article describing the transfer of B&N from one pair of hands to another, it’s very clear, before the sale, many people feared the bookstore chain was in danger of dying.

Why should we care?

Finally, Barnes & Noble is one of the biggest players in the publishing industry. What happens to them will have a ripple effect.

So, what is the future of Barnes & Noble? What does that mean for print publishing? As content creators, should we bother with traditional publishing at all? 🤔 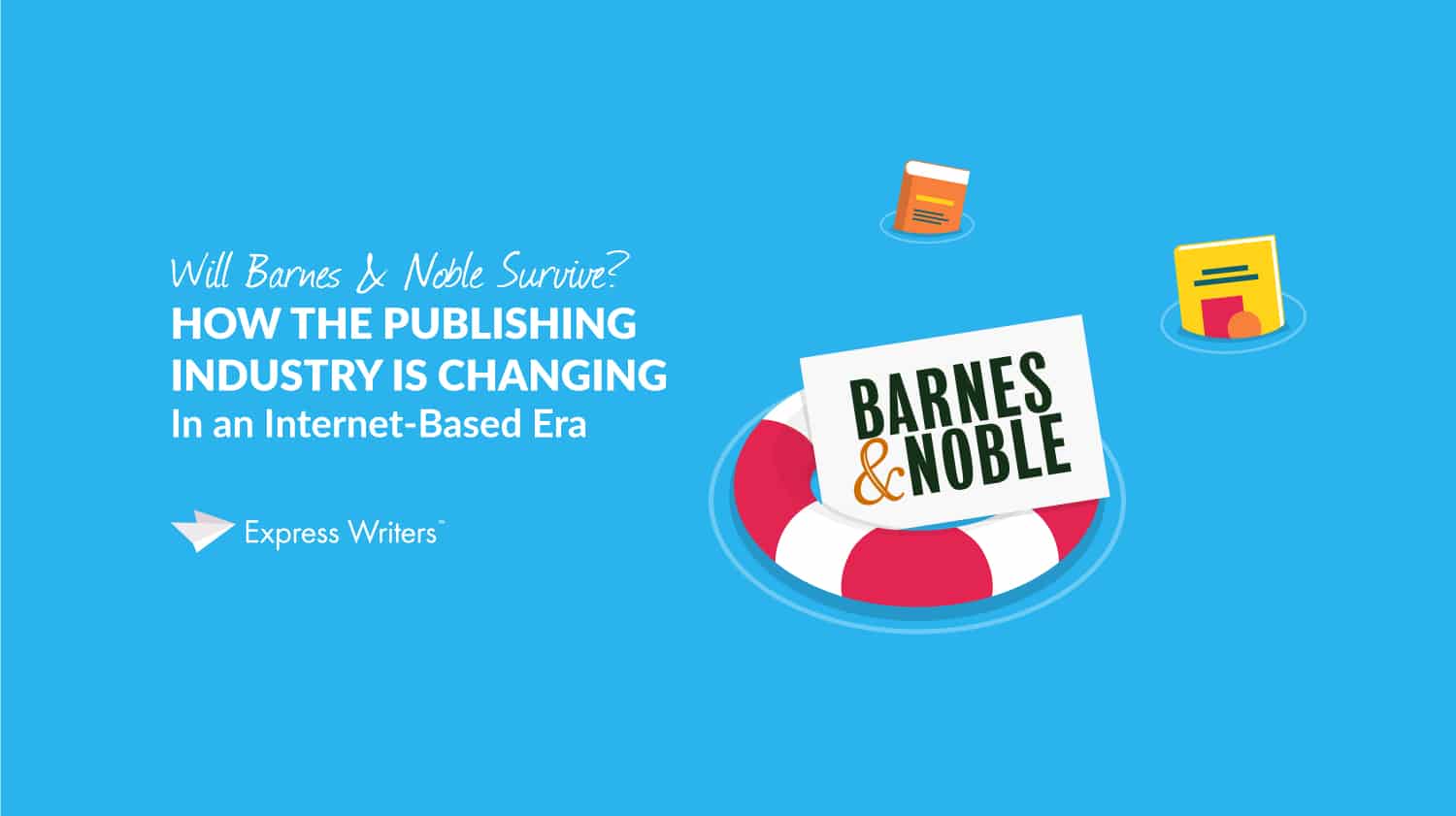 First Things First: What Does the Future of Barnes & Noble Look Like?

Joanna Penn addressed this topic recently on The Creative Penn Podcast during an interview with Mike Shatzkin. He’s an author and thought leader on what the digital future means for book publishing. He’s also the CEO of The Idea Logical Company. 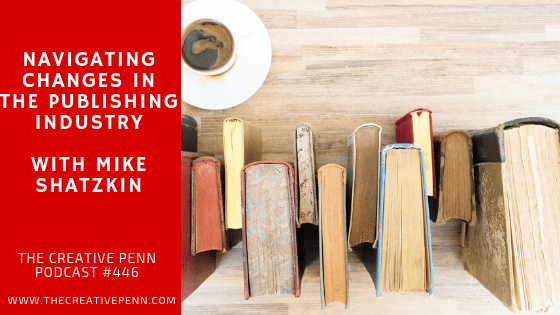 Here’s what Shatzkin had to say on B&N’s future:

“I think Barnes & Noble, very much like Waterstones, is really not configured for the future. The very large store with a very big selection was mooted by Amazon. It’s 25 years later but even now I believe that they are past their sell-by date.

Then the question becomes, if all your leases are large retail establishments and it doesn’t make sense to build them with a hundred and twenty-five thousand titles, what else are you going to fill them with?”

In other words, Barnes & Noble is running on an outdated retail model. Nobody buys books the way they sell them anymore. Hundreds of thousands of books in one store are far too many options for the average book shopper, who can find whatever they want online.

Right now, although it’s not going under, the future of Barnes & Noble is shaky.

To persist and thrive in this tough atmosphere for print publishing, they need to make some changes. 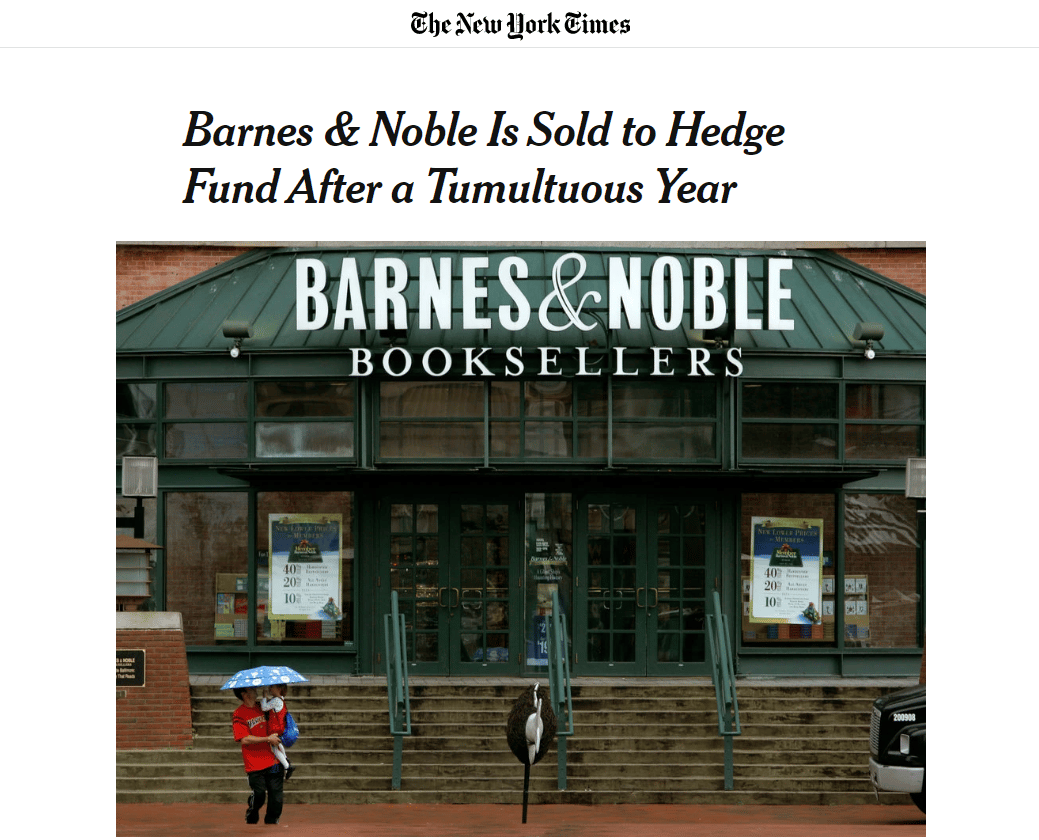 Honestly? For B&N to survive, they’ll need to change the way they operate drastically.

What's going on in the publishing industry these days? Author @JuliaEMcCoy has some thoughts. Read all about it 📚 📖 Click To Tweet

In the interview, Shatzkin suggests B&N shift to smaller stores or even mini stores-within-stores, such as taking over the book department within another retailer’s real estate.

Interesting Tidbit: Audiobooks Are on the Rise

Meanwhile, Joanna Penn emphasized the growing popularity of audiobooks, which can’t be ignored.

“…what we’re actually seeing right now in some markets is audio first. We’re seeing Storytel, for example, growing markets as well as obviously Audible… I think I’ve seen my own behavior change to an audio-first listening preference, especially with nonfiction which traditionally I would buy in print.”

This preference for audiobooks is actually a growing trend. According to the Audio Publishers Association, audiobook revenue grew by 24.5% from 2017-2018. In 2018, total revenue was $940 million. 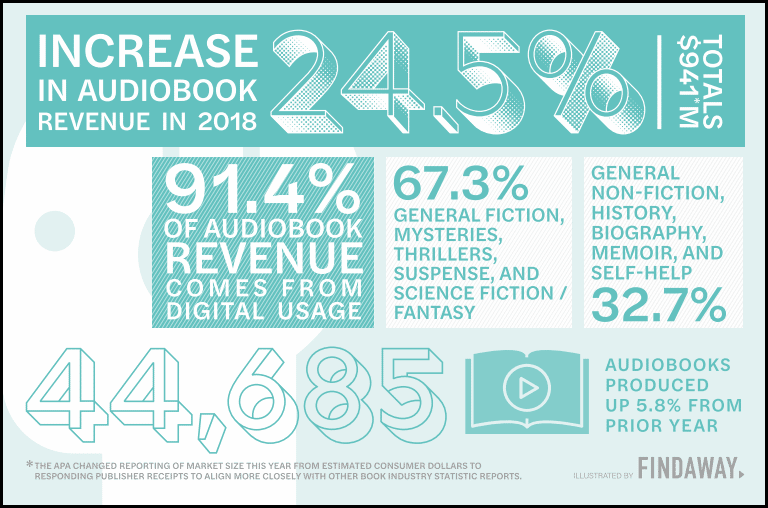 After 150 stores closed and being sold to a hedge fund, the future seems unclear for Barnes & Noble -- and print publishing. @JuliaEMcCoy answers why content creators should care and how self-publishing wins over traditional. 📚 Click To Tweet

The Rise of Self-Publishing

Alongside the preference for digital formats and shopping for books online, self-publishing has grown in both popularity and legitimacy, too.

In fact, the digital publishing industry has made self-publishing viable and profitable in the first place.

Here’s how Mike Shatzkin puts it in the aforementioned podcast interview with Joanna Penn:

“…book publishing is the business of content and markets. And if you’re a publisher, what you need to understand is the content that you are publishing and the markets to which you can appeal. Now a lot of small players have the capability to develop content and some idea of the markets.

But if it were the year 2000, you might have all that knowledge but you would have to go through the intermediary distribution system to get your books to the public. There would have been no other way.”

20 years ago, there was no way to self-publish without bearing a huge burden in terms of cost and marketing. Today, that has radically changed.

Thanks to the internet and services like Ingram and Amazon’s Kindle Direct Publishing, people can self-publish a book and immediately have a method for distribution online. Thanks to social media and blogs, you can market your book and reach an audience. 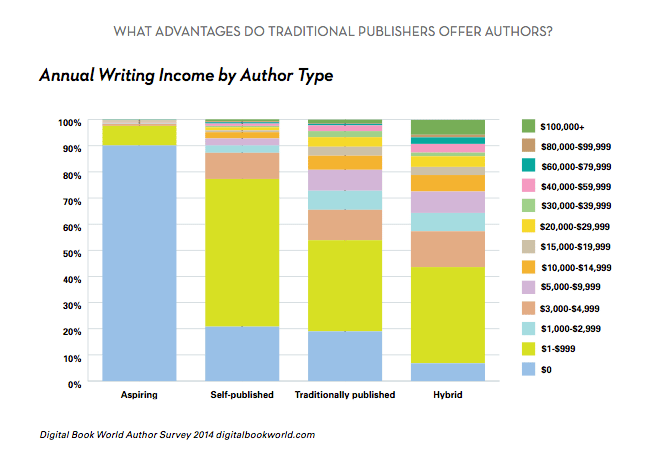 More content creators are choosing self-publishing over the traditional, thanks to the internet. In fact, 77% of self-published authors make at least $1,000 from their writing. @JuliaEMcCoy shares the pros and cons of self-publishing. 📖 Click To Tweet

Should You Self-Publish, or Publish Traditionally?

That brings us to the question of the day:

If you’re a content creator, writer, or author, should you self-publish? Or should you go the traditional route?

Both of my books are self-published.

These are the pros and cons: 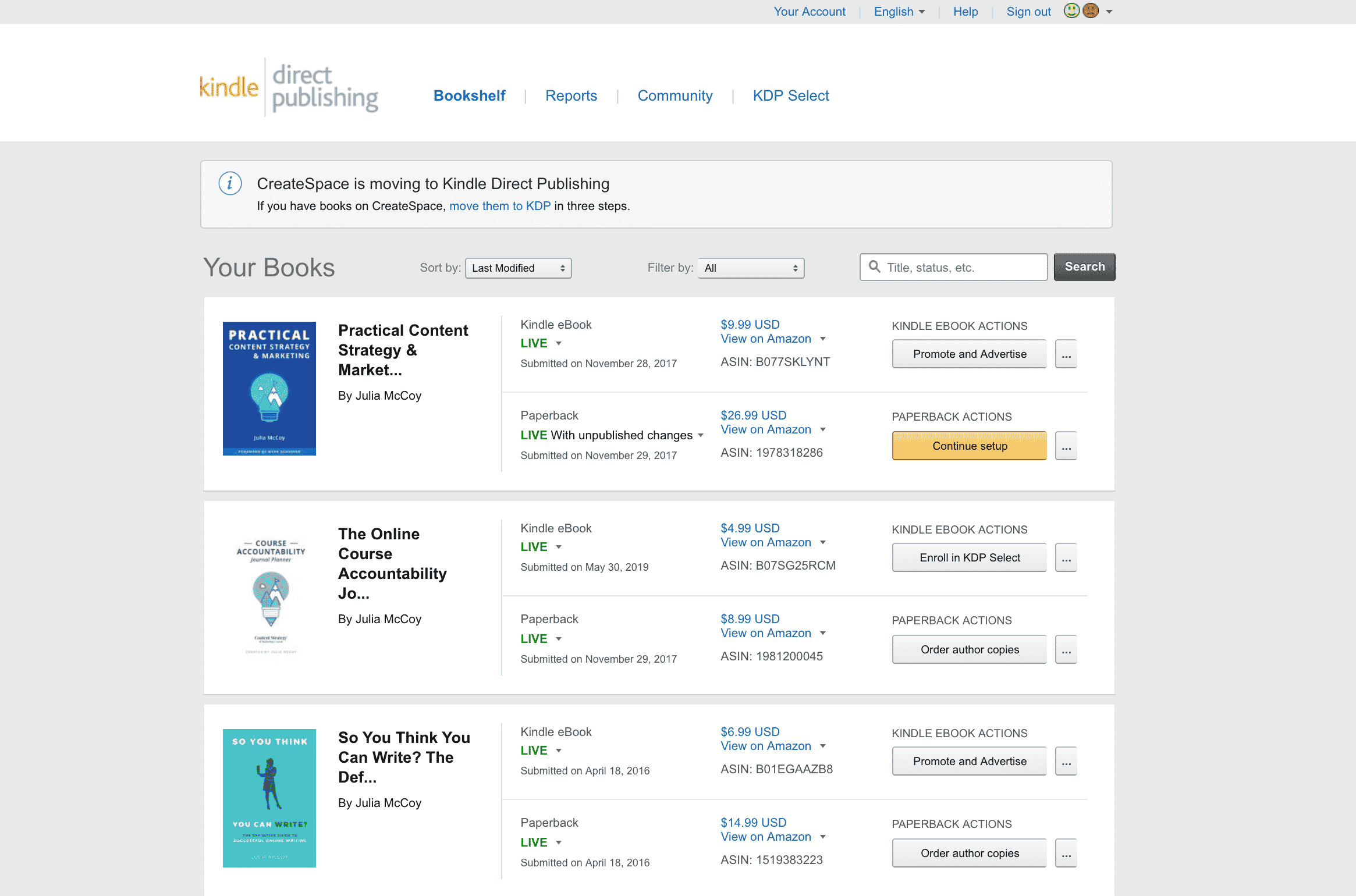 A few other reasons to self-publish:

One of the ways self-publishing really shines is in the timeline. As fast as you want your book out, it can happen. It’s totally up to you.

A self-published book can go to market MUCH faster than a traditionally published book because there are fewer hoops to jump through (see point #3). You don’t need to wait around for book agents or publishers to give the okay – YOU give the okay.

If you self-publish, you’ll keep a larger cut of the profits from every book sold.

On average, self-published authors keep 70% of their royalties.

In contrast, traditionally published authors earn an advance – a flat amount the publisher pays once. After that, the author doesn’t earn any money until the book makes at least as much as the advance amount.

For example, say an author is paid an $8,000 advance for their book. That’s all they get until the book starts earning $$ back for the publisher. After that, the author only makes $1-2 per book sold. Youch. 😳

3. Print Books Are Making a Comeback, But Not in Bookstores

As we’ve seen from the example of Barnes & Noble, counting on traditionally published books to do well in physical stores is a huge gamble.

Yes, going this route at least gives your book a shot at being sold in bookstores, but it’s not guaranteed. Stores have thousands of books to choose from to populate their shelves, and only the most commercially promising ones will make the cut.

And, if you make it to bookstore shelves, you’re at the mercy of failing bookstore models like B&N. Will you ever move a copy in that vast maze of books?

There is a far better chance that someone will buy a physical copy of your book on the internet.

4. The Traditional Publishing Route is Tedious

If you go the traditional way, publishing your book will take a long, long time. 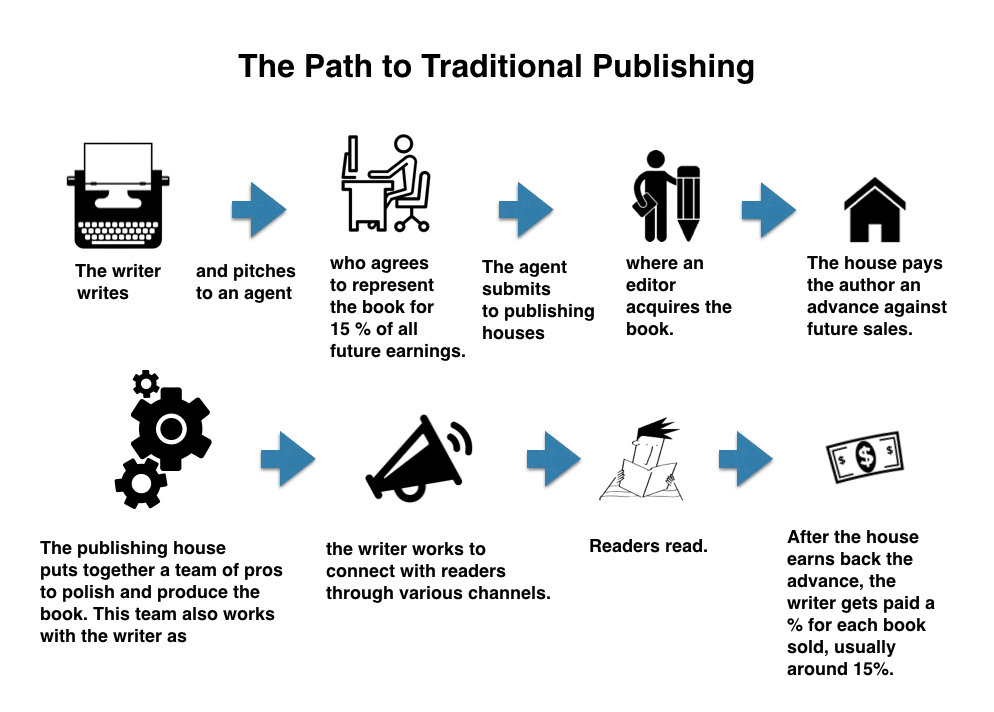 As you can see, it’s very hard to get published traditionally. The wait between a “yes” from a book agent to holding your published book in your hands can take as long as a year – maybe even longer.

From this angle, self-publishing looks pretty darn good in comparison.

Some of the pros of self-publishing for @JuliaEMcCoy: faster publication times, higher profit margins, and getting to avoid that tedious process in traditional publishing! Know more in this post. ✍️ Click To Tweet

Barnes & Noble is Skating By, and Self-Publishing vs. Traditional Looks More Promising Than Ever

While Barnes & Noble hangs on by its teeth, digital publishing and self-publishing online are taking off.

The internet has given us content creators the power to share our wisdom, stories, and knowledge with the world in book format.

If you’re thinking about publishing a book (a great way to position yourself as a subject authority), think long and hard before you go the traditional way. Self-publishing is both legitimate and profitable – and equally as rewarding.